The Cardano ecosystem, which includes the ADA token, has been experiencing a bullish trend this month. Several factors contribute to this bullish outlook for ADA and the Cardano ecosystem. One reason for the bullish sentiment is the strong adoption of Cardano by various organizations and companies.

Cardano has partnerships with major players in the tech industry, such as Google Cloud and Polymath, which has helped to increase the visibility and credibility of the platform. In addition, Cardano has been making significant progress on its core development, with several upgrades and new features being released recently. This has contributed to the overall positive sentiment surrounding the Cardano ecosystem.

Another factor contributing to ADA’s bullish outlook is its strong performance in recent days. Despite losing huge value from its peak, ADA has consistently ranked among the top 10 cryptocurrencies. It has once again started to show off a significant price appreciation in the first week of January 2023.

It has attracted the attention of investors and traders, which has helped to drive up the demand for ADA. Overall, the bullish sentiment for ADA and the Cardano ecosystem is fueled by strong adoption, partnerships, and development progress, as well as strong market performance. While it is important to be aware of the potential risks involved in any investment, the current outlook for ADA is positive.

Cardano is making a back-to-back jump, with the latest value showcasing a gain of 14.3%, which has now been reduced to just 13% at a value of $0.3245. The marginal drop in market value from the peak can be linked to profit booking activity witnessed at the top levels. 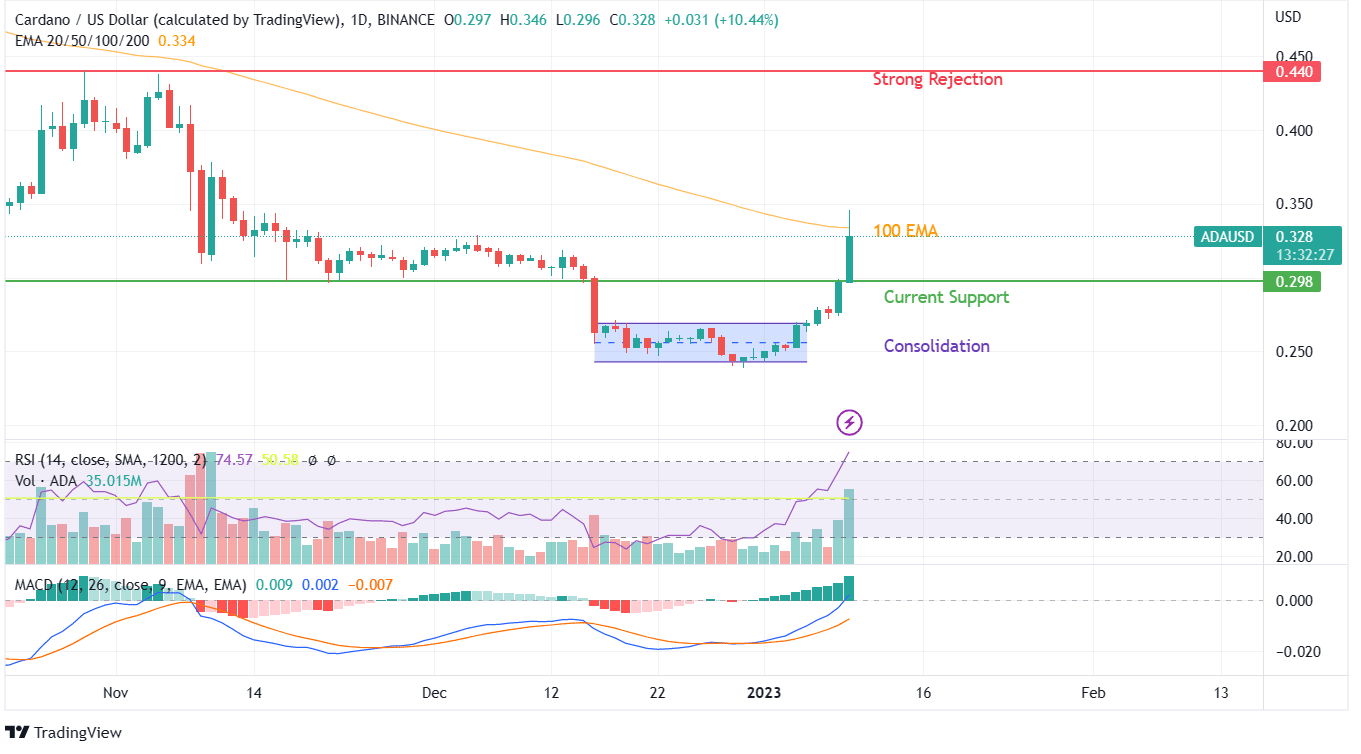 The gain in ADA offers a huge sigh of relief; MACD and RSI showcase highly bullish scenarios developed on the ADA token. With RSI moving deep into the overbought zones, MACD is jumping onward to the positive axis of its indicative zones. Transaction volumes for ADA have also witnessed a massive daily jump. While the 100 EMA curve has almost been conquered, the upside potential for ADA is not limited in any form.

Now that its price action-based resistance of $0.44 is coinciding with the 200 EMA curve, the positive outlook for this token is enhanced to 34.1% and above in the short term.

On weekly charts, ADA has overtaken five weeks of bearish movement in just two weeks of positive buying, with six more days in its arsenal. Read more about the Cardano prediction to know more about the future price action of the token.

Time would be a great beneficiary as prices can further undergo some volatility with its support. As the movement began after weeks of consolidation in December 2022, the possibility of prices retracing or falling to the same level of $0.25 is highly unlikely. 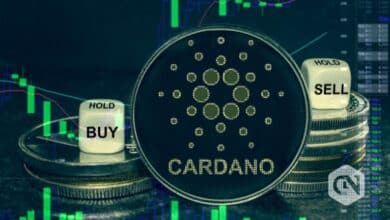