A recent study by Chainalysis has revealed that the use of Bitcoin (BTC) for commercial payments witnessed a drastic decline this year.

While conducting the study, Chainalysis surveyed around 17 bitcoin payments processors, including BitPay. The value of bitcoins handled by major payment processors decreased by nearly 80 percent in this year till September.

Interestingly, most of the merchants that accept bitcoin do not do so directly. They instead use intermediaries like BitPay to convert bitcoin to fiat currencies.

Regarding this, Lex Sokolin, Global Director of Fintech Strategy at Autonomous Next, remarked, “Bitcoin payments processing is seeing a slow but consistent decline.”

According to data received from blockchain analysis site OXT, inbound and outbound transactions at Vancouver-based Coinpayments nosedived by more than half between January and October.

The relative stability of Bitcoin, this year, had raised hopes that its use for payments by individuals and companies would increase. The data from Chainalysis’ study further revealed that despite showing growing stability, the value of bitcoin payments collapsed from a high of $427 million in December 2017 to $96 million in September this year. 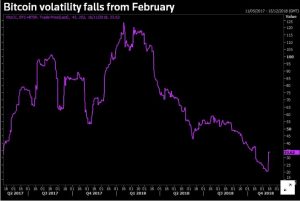 Some major companies that previously accepted BTC as a payment method have stopped doing so, Microsoft is one of them. In January this year, Microsoft announced that after almost three years it would stop accepting BTC. However, it did ensure that lower Bitcoin amounts would be redeemable by customers.

Similarly, over a year after it began accepting Bitcoin as a means of payment, gaming platform Steam stopped accepting BTC payments in December 2017. Interestingly, Bitcoin was trading at around $450 at that time.

Again, the recent dramatic deterioration has seen Bitcoin lose three-quarters of its value, falling below $4,500 on Tuesday.

The study, however, clarified that “Comprehensive data on bitcoin used for payments is patchy, as trades with other currencies tend to be included along with its use for commercial payments.”

According to experts, in order to make it to the mainstream, i.e., to become another form of money, Bitcoin needs to fulfill the two basic requirements—stability and scalability. Moreover, it needs to resolve the problems of growing transaction fees and slow transaction speeds.

As part of the efforts to address these issues, the Bitcoin lightning network was introduced. It is a decentralized network using smart contract functionality in the blockchain to enable instant payments across a network of participants. Additionally, it allows cross-chain atomic swaps off-chain instantly with heterogeneous blockchain consensus rules, thereby, making Bitcoin transactions faster and cheaper.

According to data aggregator 1ML, this week saw the lightning network reach a record 4,101 ‘nodes’ or computers that run its software—a rise of more than a quarter since August.

Ed Cooper, an industry professional who oversees cryptocurrencies at fintech firm Revolut, said, “Lightning solves some of bitcoin’s scaling issue. It’s getting payments into the wild, into the bitcoin network.”