Cosmos is at the forefront of advancing interoperability and scaling to bring the genuinely decentralized blockchain web or Web 3.0. There are many blockchains created with different intentions. Still, to exchange or perform transactions between two other cryptocurrencies, we need to convert them into a standardized token or use crypto exchanges. But with Cosmos (ATOM), one can easily send Bitcoin to Ethereum or Litecoin to TRON and henceforth.

Since 2014, developers of ATOM understand the challenges and shortcomings of the existing blockchain networks. The key to this interoperability is driven by IBC or Inter-blockchain communications. Blockchains accepting IBC will be contributing towards simple asset transfers, and further, allow others to take advantage of the benefits of either cryptocurrency in full.

Cosmos is not just limited to transactions but has also started aiding DeFi to their blockchain network. As of July 13, 2021, Cosmos blockchain has launched the Gravity DEX exchange protocol secured by over $3 billion in digital assets.

Gravity DEX is, and why should you know about it?

Gravity DEX is among the most secure cross-chain exchange protocols that would allow you to access seed-level cryptocurrencies and blockchain in development even before they get listed on centralized exchanges. This exchange protocol will provide you access to swaps and pools of digital assets between any of the cosmos-connected blockchains. Of course, the blockchains not connected on the Cosmos network will not be accessible through this protocol.

The exposure offered for accessing early-stage blockchain networks will be an excellent opportunity for crypto enthusiasts searching for new opportunities. Moreover, the Gravity DEX will level the playing field for smaller traders to access the DeFI network through a minimal swap fee of $0.01 to $0.10. It currently uses something called the Equivalent Swap Price Model to improve price consistency and reduce arbitrage, thus allowing transparent trading without the scope of manipulating the order book. Traders on Gravity Dex can even create their order book for access to instant price information.

It’s not over yet. The ongoing development of the Gravity bridge to Ethereum and other Ethereum Virtual Machine compatible chains will ensure higher liquidity to the Cosmos hub. Once the online Gravity bridge provides faster and cheaper ERC20, that would reduce Ethereum gas fees and open enormous opportunities for traders. 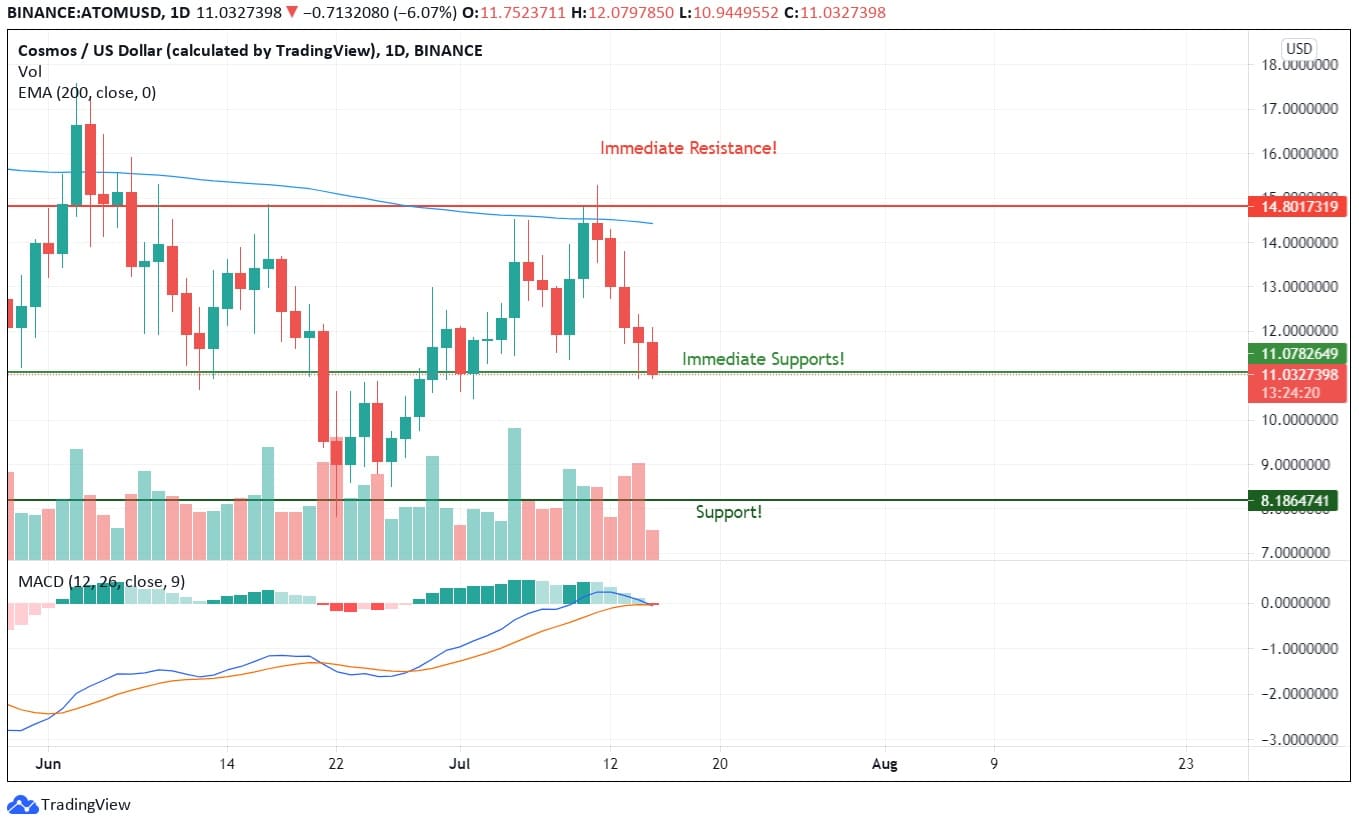 Cosmos (ATOM) price is currently trading in-between the resistance and support levels, but moving up the 200 exponential moving average lines is becoming a resistance for it. In addition, Cosmos has been pushed the fifth time in a row downwards over the last two months; considering such a price action when the prices are lower since the previous two months, the pushback from 200 EMA is a worrying sign EMA value is also decreasing.

Negativity on ATOM price action is seen as a profit booking scenario that occurs on every rise. Unfortunately, investor sentiments are not so positive across the cryptocurrency market. Falling since the last five days making new lows in the current swing is indicating a fall towards the $8 supports. A pullback can be expected from those levels, but currently, ATOM has entered a negative bearish zone on broader time frames, too, if it fails to take support from the current support levels of $11.

MACD is indicating a bearish engulfing pattern and the beginning of a negative swing. The last negative swing pushed ATOM 30% lower, so traders should be cautious of making huge positions at current levels. Let the candle pattern make some clarity. Buying at $8 levels would push ATOM a little higher, but it will have to close above the 200 EMA to become trending. Heikin Ashi charts are indicating a solid selling setup being ready. 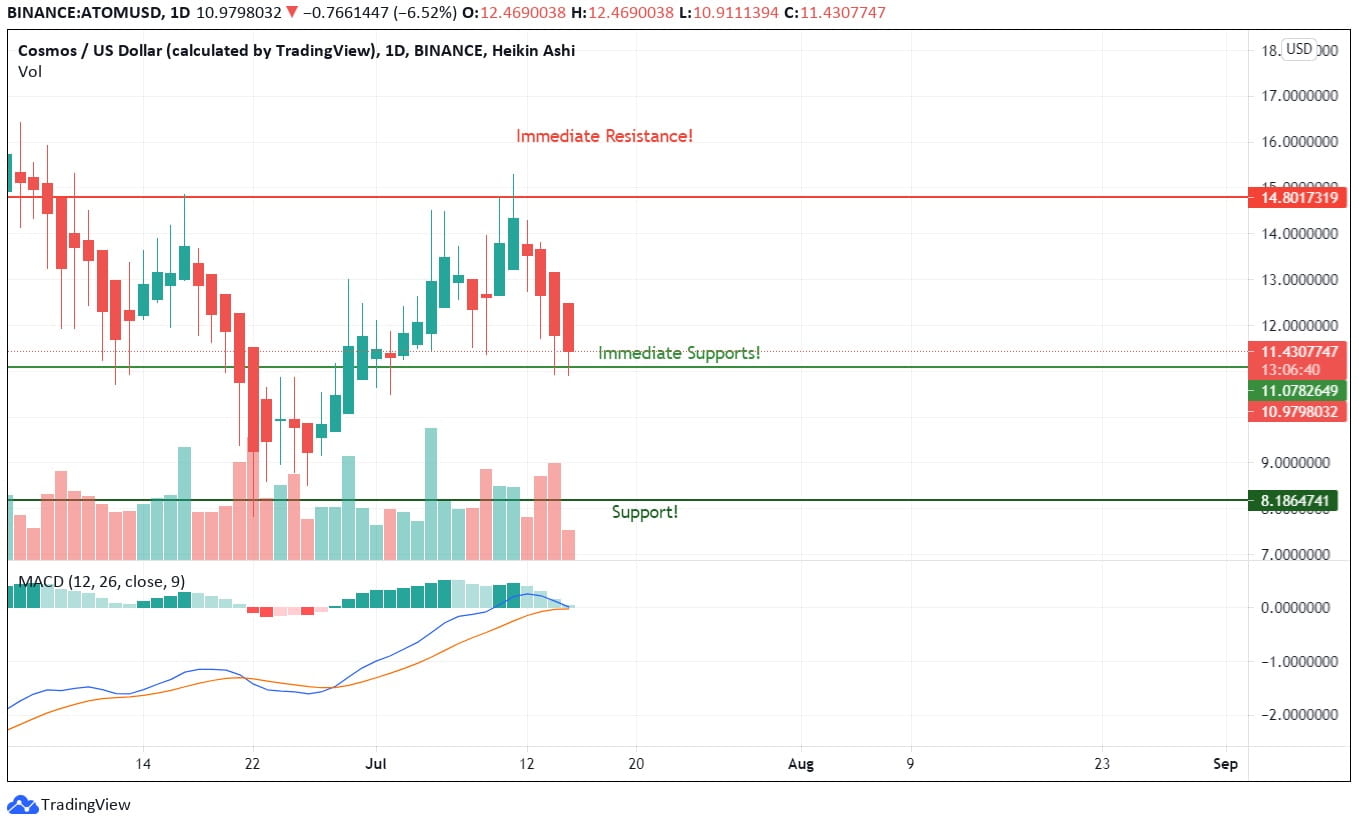 If ATOM fails to create a negative candle the following day, there could be a decent retracement but wait for a clear candle to emerge on daily charts. 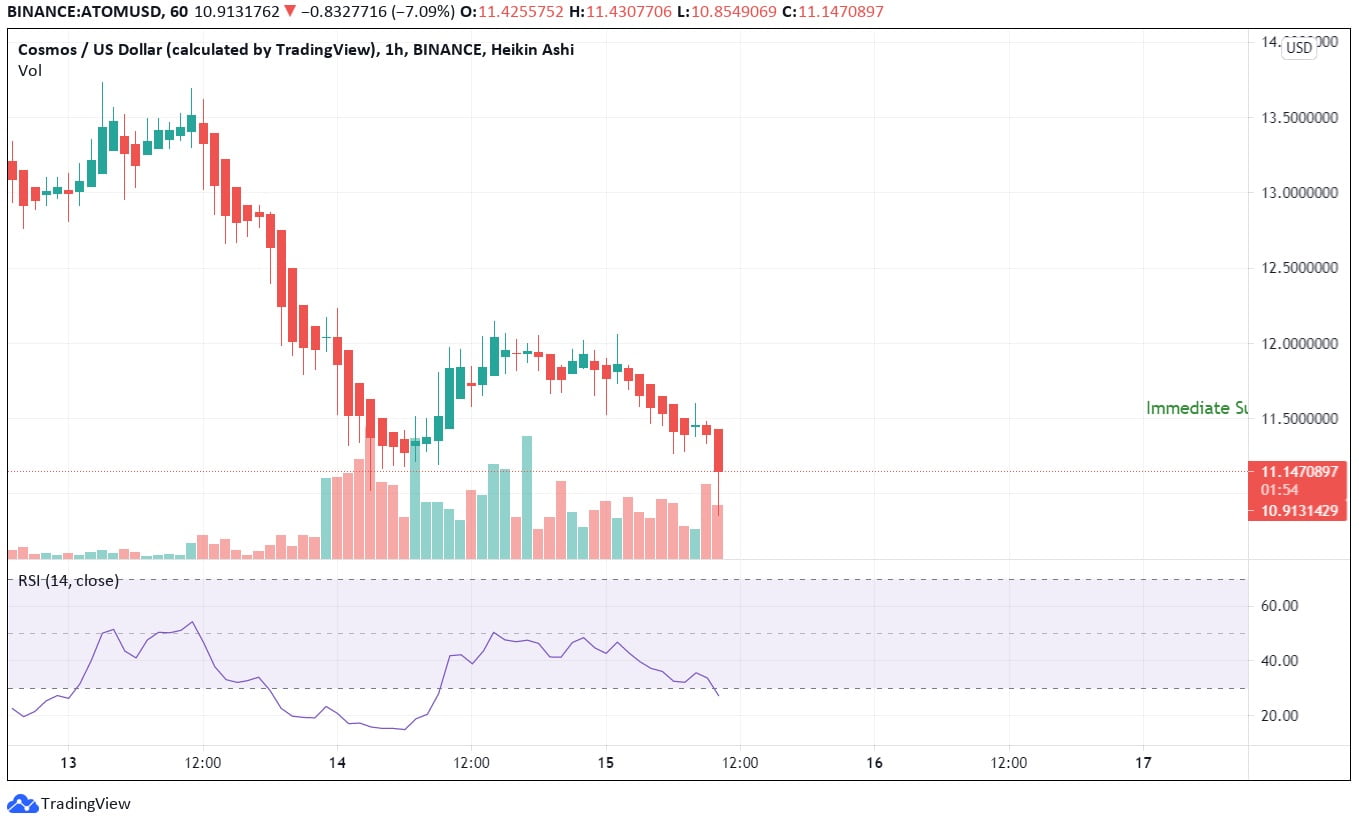 Cosmos price was pushed back to a new low of current swing today with a price of $10.8549 on intraday hourly charts. This low has created considerable selling pressure on ATOM. Ideally, follow-up red candles will indicate a negative pressure becoming active. RSI being close to the oversold zones on hourly charts with increased trading volumes over the last few hours shows a huge transaction is happening.

While increased volume is a good sign of more participation, the lowering RSI and its inability to reach overbought zones indicate an impending sell-off as per Cosmos price prediction. 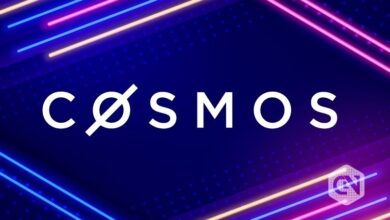 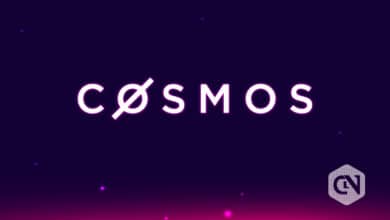 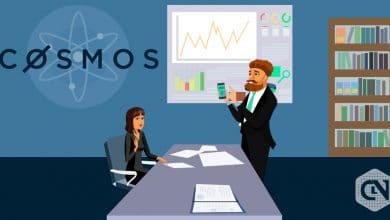 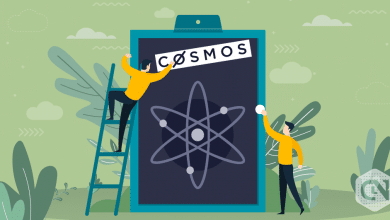 Cosmos Price Seems to be Surging; Major Resistance to Look for $3.65