Credo coin is a combination of currency and platform with the BitBounce Spam Solution designed to provide effective protection. It helps with the creation of an email market that allows users to charge a fee for receiving unknown emails. Credo coins primary focus is to ban span message from email traffic so that there is a reduction in time spent on filtering important information in the spam inbox. This goal is achieved by charging foreign addresses if they want to send emails to the personal inbox. 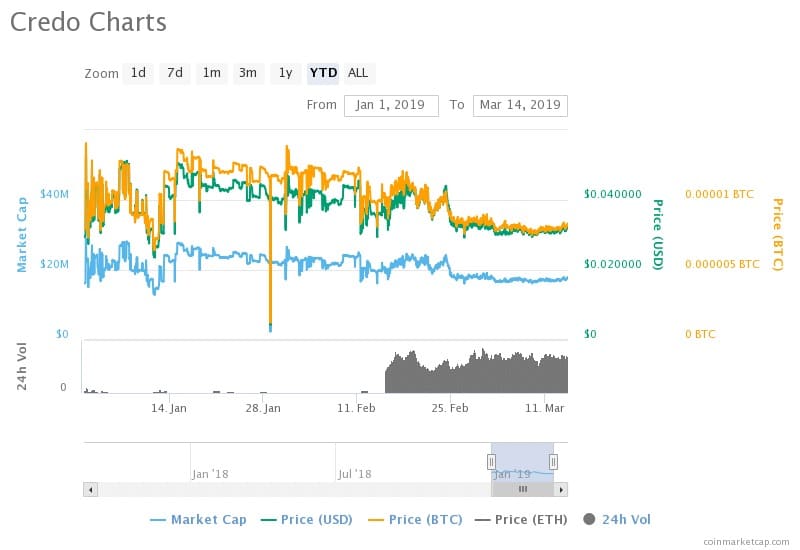 CoinMarketCap has also been observing the prices of USD and BTC along with the MCap values. The present prices of USD and BTC on March 12, 2019, at 10:54 UTC are $0.032446 and 0.00000828 respectively. Stats show that the prices of USD and BTC are overlapping each other and the values of the Market cap is running parallel beneath. Both the price values have been under heavy oscillation from the beginning of January until February 25. However, the values have been stable and linear recently. The price of BTC and USD reached their all-time high along with MCap value on January 31 with values of $0.048369 and 0.00001386 which is higher than the current values by 49.08% and 83.26% respectively. This cryptocurrency reached its milestone between February 15 and February 18, as the price of USD rallied from a low of $0.031435 to a high of 0.044905 USD which is a 42.85%, a glorious return within a short span of 03 days.

The 14-day EMA shows a downtrend with the current MCap value lower than its corresponding value of $18,221,939 on February 28 at 05:34 UTC by 2.09%. Both the averages show the declination in values. Hence the cryptocurrency is pushed under the bearish market. The overall market is on a straight line with no consequential turn of market events. This puts the market balance in neutral and not in favor of either. Under this circumstance, both the long term investments and the short term ones will have to be put on hold, until the market gives a significant solution. Observing the market will guide investments in the future.

Is China About to Pass Digital Currency Regulations?