The brand-new cryptocurrency trading platform Insider Protocol, which prioritizes privacy, has made trading bots a reality. The main objective of the Insider protocol is to maximize return on investment while maintaining the investors’ privacy. The Bitcoin ecosystem has advanced with the appearance of the Bitcoin Trading bot.

A trading bot is an intelligent, automated system that manages trades and constantly chooses the right action. Users can use the intelligent Bitcoin trading bot to make money from the trading pools. Your potential to win in the financial market depends on your capacity for trading and the completeness of the plan you have created using a variety of brilliant concepts.

Years of experience, as well as a steep learning curve, are also part of that. Albeit with the Insider Protocol Review, everything appears to be so simple. Here, experts manage the stress of trading and investing, making investments simple and secure. 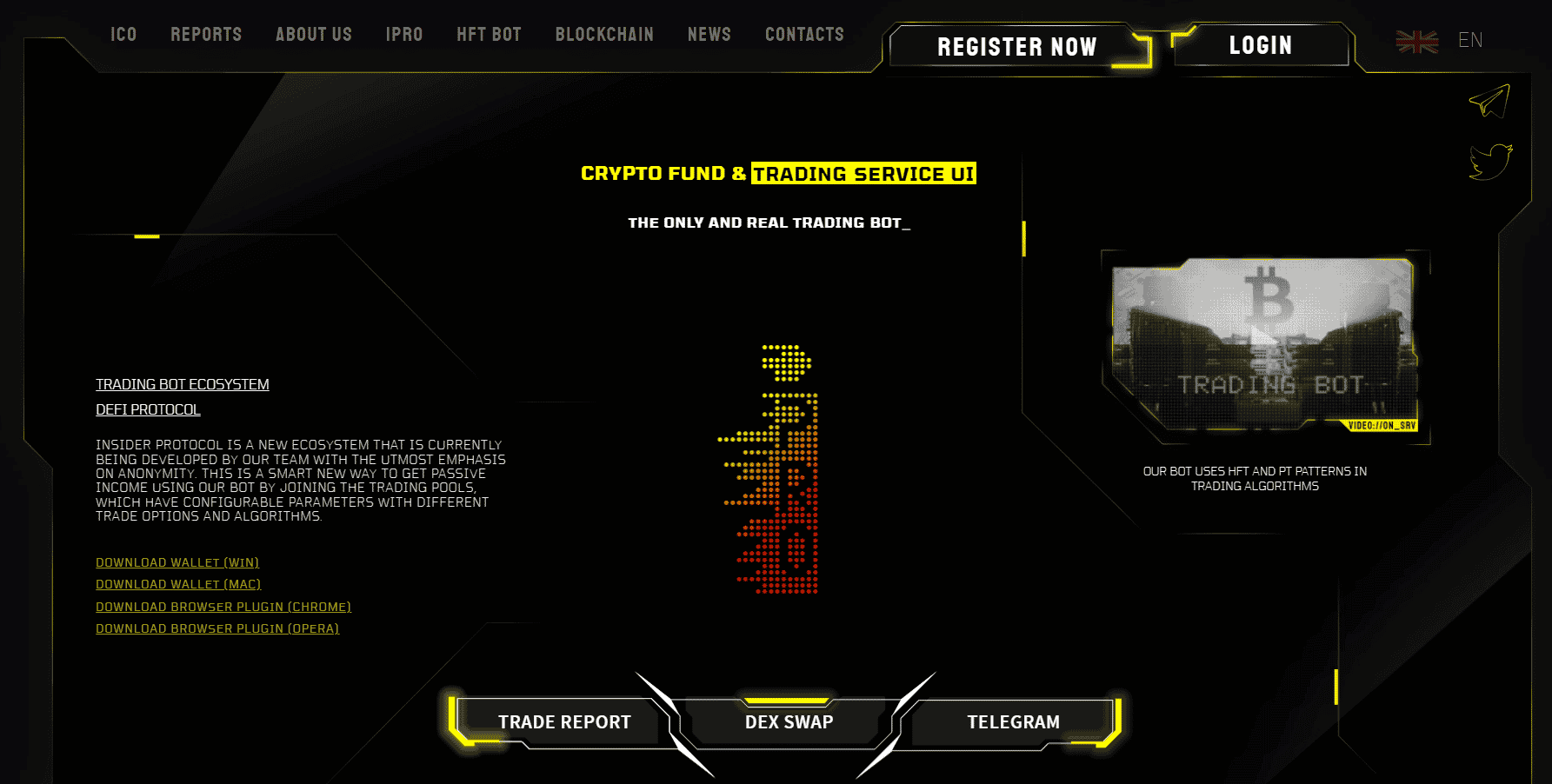 The main selling point of insider trading is that a person purchases or sells stock based on information that is not widely known to the public. An insider trading platform’s primary benefit is anonymity. The individual could be a business officer, a director employee, or a recipient of the confidential information.

A proprietary trading platform with an internal IPRO asset exists for the Insider Protocol project. The opening and closure of trading positions, as well as ongoing readjusting and recalculating of the positions’ values, are all controlled by a neural network-based platform.

The Only and Real Trading Bot

The core component of the platform is the automated trading bot, which is designed to leverage High-Frequency Trading (HFT), a style of the trading system primarily employed in the financial industry. Layering trading is a sort of high-frequency trading (HFT). The layering technique used in trading bot systems is a type of spoofing in which a trader places several visible orders on one side of the market at various price tiers, moving the midpoint of the spread away from the multiple orders in the process and then places an order on the other side of the market.

The pattern is manipulative since the execution occurs at a better price than the trader would have most likely obtained without the first orders. The layering method’s original trading approach is said to have been used by prominent trader Paul Rotter in the derivatives markets for European government bonds, mainly German government bonds, in the late 1990s and early 2000s. The Insider Protocol project’s developers are familiar with the algorithms used by exchange-operating bots, so even on days when trade is down, the trading bot will continue to earn a cut of the profits made by the exchanges.

Customers of Insider Protocol’s initial coin offering can use their Bitcoin trading bot in addition to purchasing and keeping the asset to profit from the market’s high volatility. Furthermore, the project team made test results from the BitMEX account public. This account was linked to Option X’s trading algorithm, astounding the trading outcomes.

It was feasible to generate, although not fantastic, but rather remarkable and reliable outcomes by combining multiple trading algorithms at once in the form of variations of high-frequency trading with aggressive trading techniques. Remember that the Option X algorithm still necessitates ongoing, round-the-clock maintenance from their end. Among similar efforts on the internet, no one has yet succeeded in reaching such outcomes in automatic mode.

You can see in the trading statement report that the system flawlessly complies with all risk management requirements during automated trading. Because of the algorithm’s enhanced risk management module, there are no significant losses, and even a string of consecutively losing days eventually turns profitable.

Trading Statement of the HFT Bot

Auto trading bots use the High-Frequency Trading (HFT) algorithm, which is highly scalable and constructed using the layering technique. A layering-based HFT bitcoin bot that employs the v.2.1 algorithm recently passed all stress testing. The exchange countermeasures will be enhanced in the upcoming algorithm update to version 2.2. 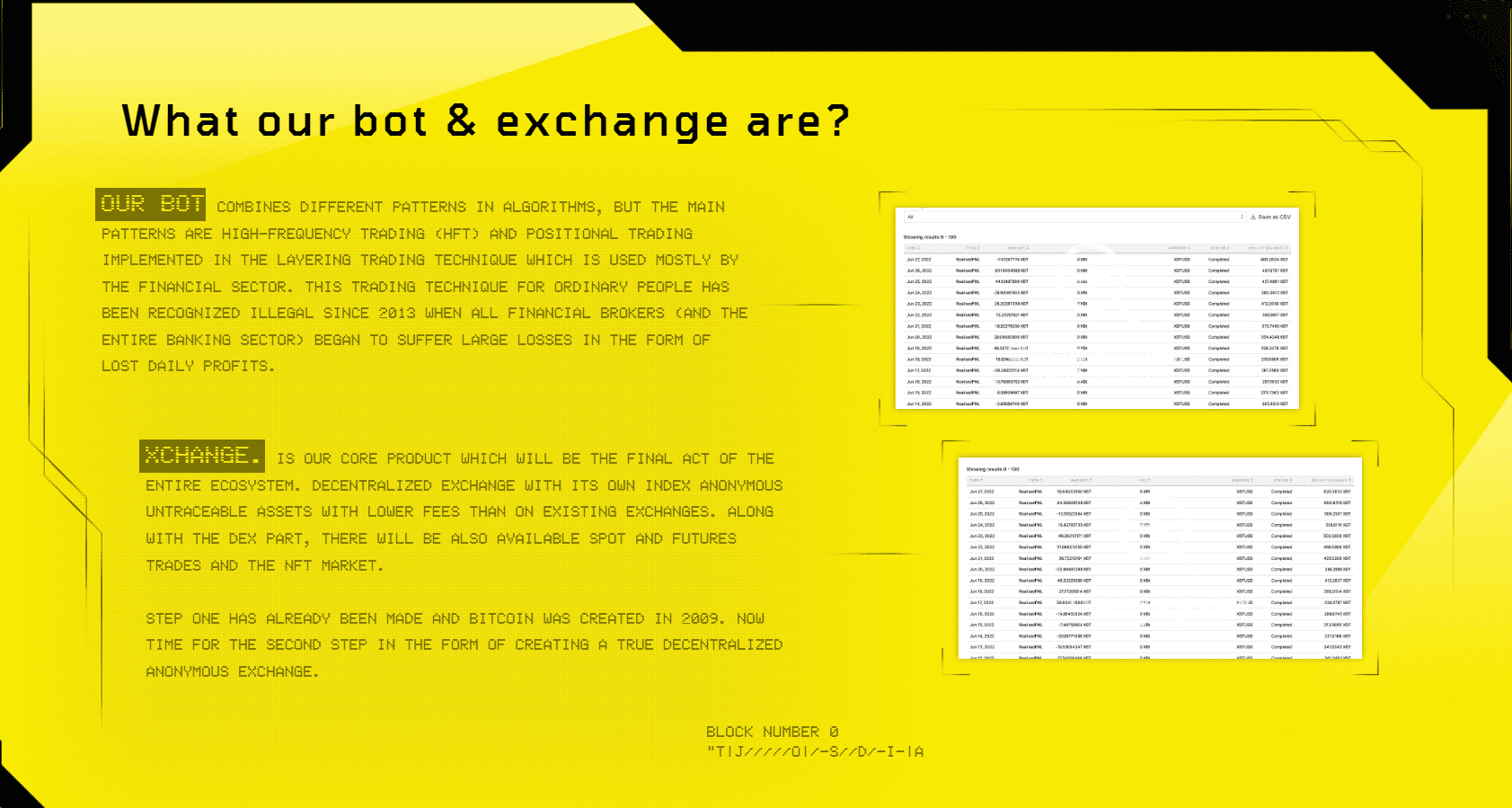 One of the Insider Protocol’s main products, the Automated Trading Bot algorithms, helps clients choose wisely when automating trades to profit significantly. Highly anonymous trading bots support the BTC/USDT trading pair. Users can benefit from this active trading pair, but the team is determined to roll out support for more trading pairs soon to support other cryptocurrencies, including Ethereum (ETH), Litecoin (LTC), and Monero (XMR).

Insider Protocol is a remarkable development in the world of cryptocurrencies and blockchain. The talented Mechanics of the Future developers are building the Insider Protocol environment. The team is creating its blockchain(Insider Protocol (IPRO) asset) based on the Mimblewimble (MW) protocol, emphasizing anonymity and eliminating any potential for tracking transactions. IPRO could be used in the HFT bot, which is only available to participants during the ICO Stage if it was purchased during the ICO Stage.

The main index asset of the Imperium network will be IPRO, the IMC token, and the upcoming stablecoin. The Mechanics of the Future Team created the Insider Protocol and its accompanying goods and services with a heavy emphasis on privacy to replicate a high level of anonymity and compete with Dash and Monero (XMR) networks, respectively. The team has set a very high bar and seeks to exceed the trader’s expectations.

Experiential traders from the stock and FX markets who want to maximize trading effectiveness and profitability are fond of HFT bots. The team used technologies to create a quick, dependable, and distinctive high-frequency trading bot. These technologies provide a dependable testing environment, quick execution times, and strong error handling, allowing developers to submit modifications at the rate necessary for this project. High-frequency bots execute several trades per minute.

These trading algorithms create little profits in milliseconds or microseconds. You might wonder if it’s worthwhile given that they only generate tiny revenues. But if a bot performs this dozens or even hundreds of times daily, the earnings could rise considerably. The bot is designed to reduce traders’ stress, provide investors passive income, and emphasizes privacy and security.

Communities are essential to the development of successful ventures. Like Bitcoin, IPRO is expanding through communities where everyone in the community is formally the project’s owner.

The Imperium blockchain’s peer-to-peer networking is its core technology. The finest feature of these communities is that they typically have few or no entry barriers and offer a straightforward route for anyone to participate in and earn skills.

Blockchain validation describes how particular validator nodes process and confirms transaction blocks. A block is uploaded to the blockchain ledger as a permanent record when a validator node has verified it.

A person in charge of validating blockchain transactions is known as a blockchain validator.

Through the IPRO trading platform, businesses can accept cryptocurrency payments in all widely used coins and convert them into a single currency. Imperium technology provides a quick and inexpensive method of moving money that doesn’t need third-party authentication and completes transactions faster than traditional bank transfers.

Anyone on the planet can send money quickly, cheaply, and without restrictions because it does away with the need for trustworthy third parties to validate transactions. IPRO won’t be supported, regulated, or overseen by banks, financial institutions, or authorities.

Exchange is the next generation of truly decentralized exchanges, and the Mechanics of the Future team is working hard to create it. Investors will likely witness the exchange’s debut very soon.

Mimblewimble had a few issues from a technological standpoint. As an illustration, using Confidential Transactions causes the transaction time to be slower due to the volume of data. But the Mechanics of the Future team resolved the MW network’s sluggish pace after many years of study and development. With the help of the Insider Protocol integration modules, developers of all projects on all networks can easily and rapidly add the startlingly swift transaction speed of less than 1 second to their projects and apps.

In the most recent tests, the maximum throughput of the Insider Protocol network, utilizing the MimbleWimble technology (soon v 2.0), exceeded the Solana blockchain’s performance while maintaining transaction anonymity. Now, the MW blockchain offers some highly intriguing characteristics, including quick transaction times and a novel and anonymous approach to transaction storing.

The Insider Protocol is a relatively new multipurpose blockchain and cryptocurrency platform developed by the Mechanics of the Future team. The Insider Protocol’s environment comprises the following components: Hedge funds employ the Imperium Protocol, the Atlas DEX Swap, and an HFT algorithm (testnet).

The project Insider Protocol is expanding quickly due to its unique ecosystem components. Although the entire Insider Protocol ecosystem is still in construction and hopes to employ the extremely secure and scalable Mimblewimble (MW) Protocol, the platform is designed to be able to handle large quantities of transactions swiftly in an effort to compete with existing blockchain protocols.

The Insider Protocol ecosystem is a significant cross-chain project that enables users to transfer funds between multiple networks easily. Users can easily transfer money, for example, between the ETH and Polkadot networks. Additionally, they won’t be limited to just these two networks. The networks Binance, Pololu, Cosmos, Ethereum, and others will be supported.

Insider Protocol’s worldwide environment promises to be appealing to the entire community, which prefers to keep its money hidden. The project’s features will also appeal to development teams who want to create their projects and applications on this fast Insider Protocol blockchain.

The official website and the Telegram channel both provide in-depth details and trading reports. Although you can also contact their professional customer support system through various ways:

Our Verdict on Insider Protocol

Insider trading proponents contend that doing so reduces risks and improves market efficiency. The key component of the concept is the chance to participate in the liquidity of one of the trading pools and profit from the trading of a genuine trading bot. This will be the first ICO where customers can use the asset for trading with the trading bot and purchasing and holding it.

There are several limitations, though, which need to be addressed.

Only the BTC/USDT trading pair is compatible with their algorithms, and there are only three trading algorithms for various trading times (short-term, midterm, and long-term). An internal IPRO asset is traded on the Insider Protocol project’s own trading platform. Trading positions are opened and closed on a platform powered by neural networks, and the value of the positions is constantly changing and being recalculated. Due to its high entrance criterion and being built for hedge funds, this trading bot might not be appropriate for new investors.

For big investors who don’t want to trade bitcoin on their own 24 hours a day, every day, this development will save them a tonne of time, headache, and money. It witnessed verified video proof of the existence and proper operation of the Insider Protocol automated trading systems for the first time among numerous projects.

After analyzing the Insider Trading Platform, we believe it to be a ground-breaking tool for investors searching for smart methods to make passive income, as it has shown great potential in a number of other areas.