Dash has been forked from bitcoin protocol, and it is a next generation digital currency. It is a decentralized autonomous organization (DAO) that has a network of master nodes which functions to maintain the security of the blockchain. It was initially launched as Xcoin in 2014. Later, it was renamed as DarkCoin, and then, again, it was renamed as Dash in March 2015. 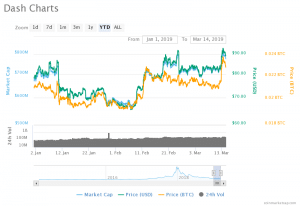 Although there are many developments planned for DASH this year, majority technical analysts have opined that it depends on the general market sentiment regarding the price hike of this crypto. Dash can recover above $100 in 2019 provided; there is less volatility in the crypto sphere. As per Dash Forecast, Dash has a great probability of losing to its major competitors like Monero, and Zcash in 2020. In 2023, the general market sentiment is expected to improve a lot, and at that time, its value can upraise to $700. If the situation remains all right and there are good developments of Dash to attract many investors, then, by the end of 2019, it can be trading around $140, by the end of 2020, it can have a value of approx. $300 and in 5 years, its price can be approx. $700. If the situation remains worst, then, its value can be as low as $50 in this year and $3 in 2020.

Dash is a highly fluctuating crypto, and it is not a good idea to splurge on it now. It’s better to wait till it attains stability and then to make investments accordingly.