Dash is an open source cryptocurrency and is a form of decentralized autonomous organization whose digital currency is privacy-centric concerning instant transactions and is executed by a subset of users called “master nodes.” Dash’s fascinating incentives based peer-to-peer networks makes it more workers friendly too, where miners are recognized and rewarded for securing the blockchain and master nodes are rewarded for validating, storing and serving that blockchain to the users. Dash puts together another technology called IntantX- that reverses the fully sent transactions within four seconds. 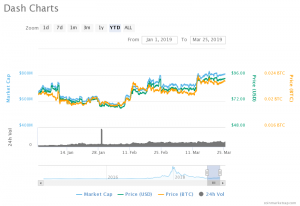 Coinmarketcap lists DASH as the 25th largest cryptocurrency in the market. The market cap value of DASH as on 25 March at 12:49 UTC is $809,522,989 USD for the corresponding 24h volume of $284,876,224 which is relatively higher by 14.85% from its value on February 25 of $704,830,566 USD. The digital currency started this year with the MCap value of around 730 million USD. However, the market was slow and had sharp falls before it began to enhance. The values dipped during the deteriorating period between January 11 and February 08. The continuous growth in values compensated this downtrend period of one month; after that, the values boomed reaching its all-time high on March 18 with the value of $826,415,302. The current value is 2.04%lesser than its peak MCap value which is negligible. The 14-day moving average shows an uptrend in the market. The values rose from USD 723,201,296 to its current value by 11.94% driving the cryptocurrency into the bullish market.

Along with the 14-day MA, the 20-day EMA also exhibits a major uptrend of the digital currency, with the values rising from $725,067,870 on March 05 to the present-day value with an 11.65% significant increase. This puts the digital currency under bullish pressure. With the cryptocurrency in its peak period and an overall rise in the market, the balance points in favor of buyers. The traders investing short term will help increase the value of the currency further which will work out profitable for the currency’s market. The investors with long term investment plans must indulge in the current market which will prove more beneficial with the contributions from the traders, in the future.

10 Things That Every Ethereum (ETH) Enthusiast Must Know