Formerly Known as ‘Darkcoin,’ Dash (DASH) is just an alternative to cash in the digital transactions. And similar to cash transactions, the anonymity of the transaction and users is the unique selling point of Dash. Moreover, payments in Dash chips are private and cannot be tracked along with balance sheet. The anonymity of users is maintained by the use of a state-of-the-art technology called InstaX. Dash transactions are very much similar to Bitcoins with an added layer of security and obscurity due to the presence of InstaX. Another feature of Dash (DASH) is a core network of servers called Masternodes. Transactions in Bitcoins take a longer amount of time because of the need for confirmation and other proof-of-work requirements; however, in case of Dash transactions, time is significantly reduced because of the Masternode. 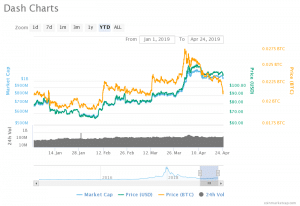 Not to forget that there is an upper limit in the total number of supply of DASH coins and that is 22 million, which makes it a stable as well as a deflationary currency. The short and medium-term trends for Dash seem to be bullish. Unlike various cryptocurrencies whose value has reduced after a sudden jerk, Dash (DASH) has maintained its stability because of Masternode and treasury component. For medium-term investors, there is a resistance level at $140, $150 and $160. Additionally, DASH has support levels at $130, $125 and $120 for the medium term. Talking about the short term resistance, it is at $125, and all the indicators suggest that it is the optimum time for buying. And for long term investors, overall asset value seems to be bullish for DASH throughout most of 2019.

DASH Spiked Above $100 Briefly; Will it Reclaim Highs?