Dash is a decentralized, open source and peer-to-peer blockchain based cryptocurrency. This coin was introduced into the market at XCoin; later it was renamed as Darkcoin in 2014. However, it was rebranded as Dash finally in 2015. Dash’s main features include InstantSend and PrivateSend. InstantSend payments are faster and are verified by the network’s master nodes. Dash calls its coin mixing service PrivateSend. Dash’s fascinating incentives based peer-to-peer networks makes it more workers friendly too, where miners are recognized and rewarded for securing the blockchain and master nodes are rewarded for validating, storing and serving that blockchain to the users. Also, Dash’s platform is customer friendly and lets you transact anonymously and hence protects the privacy of the users. 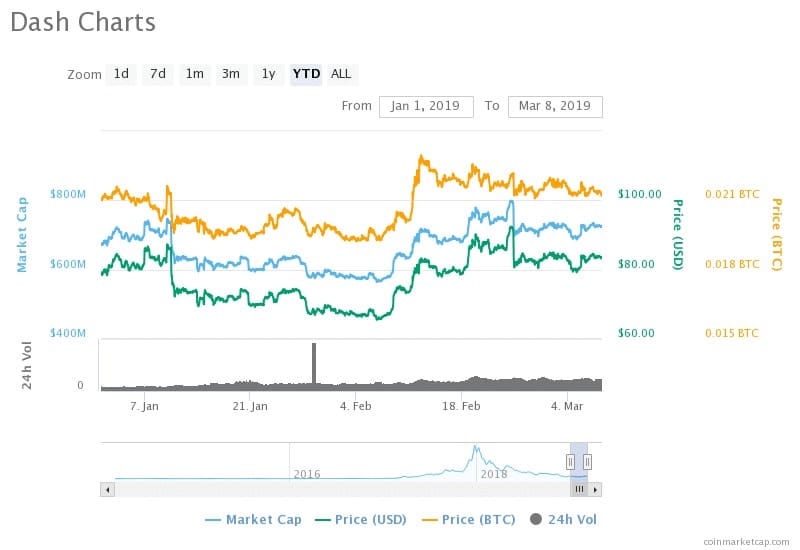 According to stats from Coinmarkcap, the corresponding market cap value of DASH, the 15th largest cryptocurrency, on March 08 at 12:19 UTC is $725,436,877 for its 24h volume of USD 238,854,431 which is relatively higher than its value of $577,201,327 on February 08 by 25.68%. The cryptocurrency’s market value started on a good note at the beginning of January; the MCap value saw a high on January 9, when the value reached close to 750 million USD. However, it dipped drastically on January 10 and went downhill until February 08, reaching its all-time low on February 07. Nevertheless, there was a brief increase in the values when MCap traded for its all-time high on February 24 for $797,969,470. The current value is lower by 9.09% from its peak value. The 20-day exponential moving average shows a significant rise in values. The numbers rose from $689,407,983 USD on February 16 to $725,436,877 USD – the present day value by 13.60%. The ascending percentage pushes the digital currency’s market into bullish pressure.

Related: Read our Dash Forecast for Next 5 years

CoinMarketCap has also been observing the prices of USD and BTC along with the MCap values. The present prices of USD and BTC on March 08, 2019 at 12:19 UTC are $83.61 and 0.02118007 respectively. Stats show that, although there is a similarity in the highs and lows of the market trend, BTC has taken the lead, followed by the MCap/USD pair. There have been irregular swings in the price of BTC with sharp rises and falls. The values were downtrend between January 11 and February 08. It reached its peak value on February 12 of 0.02295430 which is 7.73% higher than the present-day value. The MCap/USD pair reached the peak value together on February 24 at 11:39 UTC when the MCap traded at USD 797,969,470 and the price of USD was $92.27. The USD’s price was higher by 9.39% when compared to the current value. This cryptocurrency reached its milestone between February 8 and February 12, as the price of USD rallied from a low of $66.98 to a high of USD 83.28 which is a 24.34%, a glorious return within a short span of 04 days.

The 14-day EMA shows a downtrend with the current MCap value lower than its corresponding value of $747,568,479 on February 22 by 2.96%. Although, both the averages do not synchronize, the 20-day MA shows a significant rise and the 14-day shows a negligible dip. This puts the market balance in neutral and not in favor of either. Under this circumstance, both the long term investments and the short term ones will have to be put on hold, until the market gives a significant solution. Observing the market will guide investments in the future.