Dash (DASH), formerly called “Xcoin” and “DarkCoin,” is an instant and semi-private cryptocurrency introduced in 2014 on the blockchain platform. It is the fastest and most secure digital currency in the world and is a peer to peer decentralized payment network. Dash was designed to make transactions faster and to have a better governance structure in place to overcome the shortfalls faced by Bitcoin. 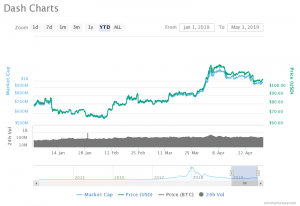 After a challenging 2018 where it faced a lot of negative market sentiment, Dash is slowly regaining its place in the crypto market on the support of major upgrades and an increase in its network base. Dash has begun 2019 on a steady note. It had made its presence felt in Venezuela and is now foraying into the Columbian and Thai territories. Dash has collaborated with many payment platforms thereby making it a worthy coin to invest in. Dash was designed to provide an optional privacy feature to those desirous of keeping their transactions private. Users can transact faster on Dash network and also the transaction fees are very low when compared with other cryptocurrencies. Hence it is a likable coin. It offers InstantX, which guarantees and confirms payments in around four seconds. Also, Dash owns itself; this allows any changes to be made quickly and easily. The Dash blockchain developers are working towards building “Evolution,” which is going to be Dash’s core goal of building a sustainable merchant and consumer-friendly blockchain. Users who want faster transactions at a lower fee and greater privacy features can always opt for Dash. As per Dash Predictions, they are positive about a turn in its fortune in the future and feel that for long term investors, now is the right time to invest as the price of Dash is going to increase multiple times than its current price.

Electroneum (ETN) Price Analysis: Will Electroneum Be Able To Sustain Its Popularity?