Dogecoin (DOGE) is a blockchain based decentralized P2P (peer-to-peer) cryptocurrency enabling money transactions in a faster & more secure manner. Forked from Litecoin in 2013, this open source platform has built a huge community of followers in a very short span of time and aims to revolutionize the internet economy. Created by Billy Markus from Portland and Jackson Palmer from Sydney, the coin is used to incentivize content contributors on Twitter & Reddit. It can also be used as a wallet on a mobile phone, website or computer to buy and sell goods & services as well as to trade it for other cryptocurrencies or even traditional ones included US dollars & Euros. The popular usage is allowing fellow tipping users are also doing rounds and growing demand for the crypto. The team of duo likes to maintain its reputation as fun, friendly crypto with Doge as its mascot. The concept & logo of the company is inspired by a meme on Shiba Inu (Japanese dogs breed). The currency has many eyes on it since its inception owing to a big number of faithful supporters who can vouch for its growth. 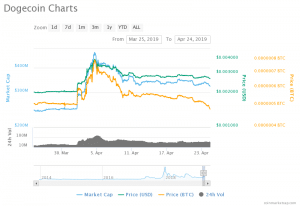 The growing demand & adoption of DOGE as an alternative payment method in online retail stores indicates that the coin is here to stay for longer. Hence, investing now is a good option because as per Dogecoin Price Prediction it seems that the price is expected to increase to 0.004 USD to 0.008 USD by the end of the year 2019 From a 2-year perspective, it is certainly over 0.01 USD as it gains trust from major players. Even the coin did not fluctuate much during the recent blow to the Cryptocurrency market and was able to maintain its momentum during hard times as well. Being independent of Bitcoin gives it an edge to last longer and remain unaffected. The faster transaction time and addition of other innovative features might just do the wonder for the coin.