Dogecoin (DOGE) is a blockchain technology backed crypto coin which aims to provide a payment and settlement system for online content creation. This currency is mostly used on the payment for contents made for Twitter and Reedit. It was taken out of Litecoin in 2013. The crypto coin’s logo has “Doge”- a popular internet meme. It is a Shiba Inu dog. The coin was created to give a substitute to bitcoin for a specific sector. 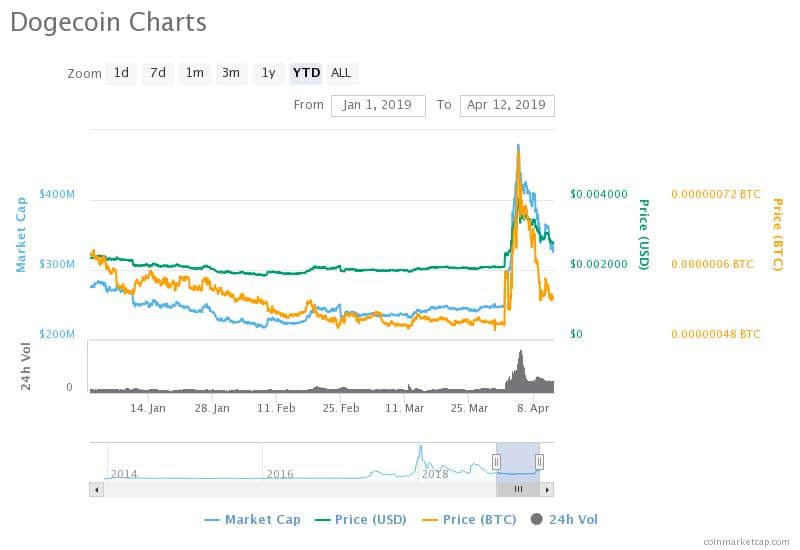 As mentioned, Dogecoin (DOGE) was moving with a stable pace throughout the year. Along with the whole crypto market, it also gained points after April 1st. By comparing figures of 1 month back, we can see the gradient of change in the performance of the coin. The market cap on 12th March was 237,098,295 USD. And the value of each coin was 0.001999 USD and 0.00000051 BTC. The current market cap is 37.22 % more than the market cap of 1 month back. The same way, value in USD has increased by 36.71 % in the last 30 days. After 1st April the coin gained almost 100 % in just four days. But it faced one resistance at 0.0040, and then it started falling to the current level.

The coin has started stable growth soon caught up with the storm. But now the fall in the value has concerned the whole market. The lessening growth has been there for the last week after Dogecoin (DOGE) faced a resistance. We predict the coin to fall even more. This can create a good avenue for making a buy transaction. But, once it reached its usual growth point, it is likely to move on a stable note. The medium-term also looks not so bright. Only the long term can give better results. And also, as per DOGE Price Prediction, it seems that the value of each Dogecoin (DOGE) may reach 0.01 USD level by the end of 2019.

Ethereum Classic (ETC) Price Analysis: No More Forks Of ETC Can Raise Its Price To $35 By 2019 End