Initially born as a joke but, eventually, Dogecoin or DOGE turned out to be a more approachable and friendly alternative to Bitcoin. One of the reason is that it has a very vibrant and welcoming community which is gradually expanding day by day. Its founder Jackson Palmer got the idea of this coin from the comic character of the friendly mascot Shiba Inu. The big cute picture of the dog is very appealing to giant investors and majority merchants, and this is the reason why within a short period DOGE created a great upsurge in the social media arena and also made it big in the cryptocurrency sphere.

DOGE is currently traded at USD 0.001981 (UTC time 04:55). It is at the 27th position among all the cryptocurrencies that are getting traded in various crypto exchanges. Its present market cap has a value worth of USD 0.001981. Currently, 118,557,036,640 DOGE are in circulation. Compared to its yesterday’s price, the value of DOGE has been decreased by -0.19%, and it is currently following a bearish trend. 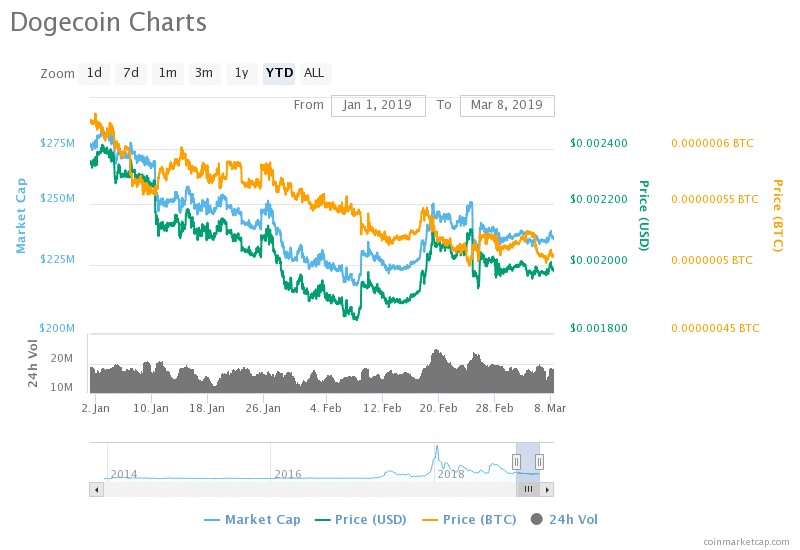 So far its performances are concerned, DOGE has been amazing. The way it retrieved from its losses in the past year had caused a great stir among global investors. This altcoin has repeatedly proved that in spite of the highly volatile market, it can regain its value. According to the crypto analysts, this coin is expected to be around cents till the mid of this year, but after that, it can rise to $0.0147. The minimum and maximum predicted price for this year are $0.0122 and $0.01 respectively. From the optimistic point of view, predictors suggested that it can rise to $0.0186 in late 2019. The fact that Doge is often compared to BTC is because its transactions are very fast and it takes much less time for processing blocks. By 2023, Doge should reach $0.04 mark.

So, considering all the above points, Doge can be a profitable investment this year. Moreover, its community is on growing as it has several charity programs and outstanding online community support which can thereby increase its users and worth in the future.

DOGE is expected to perform higher in the upcoming years. This year can be a good year for DOGE, and it can give good returns to its investors. In the long term basis, it is better for the investors to wait till it attains stability to an extent and then, making investments accordingly.

Litecoin's Director Discusses Advantages and Disadvantages of PoW over PoS