Dogecoin – a hard fork of Litecoin, is primarily a tipping system that rewards the users for the creation and sharing of quality content. Dogecoin was introduced in December 2013, as a ‘joke currency.’ In 72 hours, from the time it was introduced into the market, Dogecoin jumped nearly 300% in value, bouncing from USD 0.00026 to USD 0.00095, with a volume of billions of doge coins per day. The coin reached a capitalization of USD 60 million in January 2014, pushing the currency amidst the top cryptocurrencies in the market. 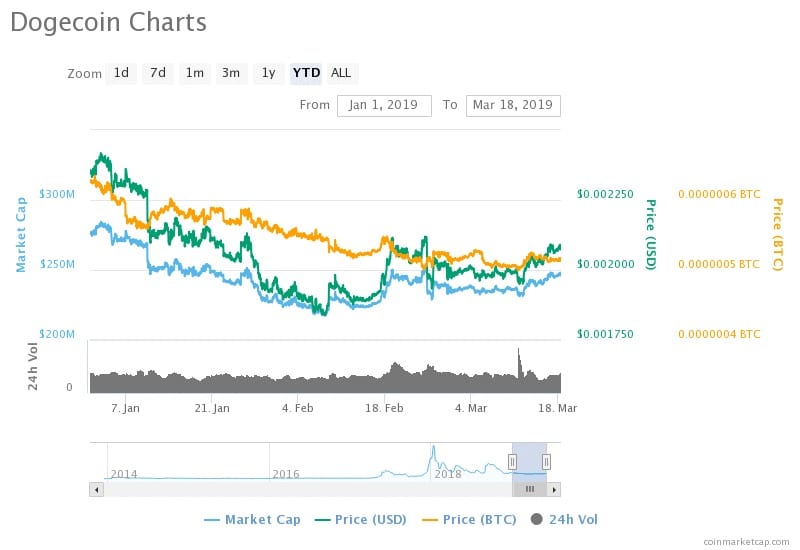 Coinmarketcap analyzed the market trend for Dogecoin (Doge), 26th largest cryptocurrency in the crypto market. The Market cap value traded at $246,087,317 USD for the 24h supply of $19,434,907 on March 18 at 11:34 UTC. The overall market is on its uptrend which is shown by the percentage difference in the relative value of $227,498,356 on February 17 which is 8.17% lesser than the current rate. The MCap opened as high as 276 million dollars at the beginning of January 2019 and crossed 280 million USD in 02 days. However, the cryptocurrency faced a downfall between January 10 and February 08 with values dipping and reaching its lowest of USD 217,425,630 at 06:34 UTC. The values began to enhance gradually from its lowest and reached the highest of USD 250,788,573 on February 24 at 17:34 UTC. The hike percentage is calculated to be 15.34%. However, the current value is lower than the highest by a very negligible percentage. The 20 days EMA of DOGE exhibits the market uptrend. The values rose from $238,952,508 on February 26 to the current value, with the percentage hike of 2.99%. This uptrend of the market exerts bullish pressure on the digital currency.

The 14-day Moving average also shows an uptrend of the market with the values rising from USD 235,618,836 to the current value with 4.44% growth. The percentages of both the moving averages display a positive growth in the market trend. The bullish pressure on the market pushes the balance in favor of the buyers. Hence, the market looks suitable for both investors and traders with long term and short term investment plans. The investments from the traders will increase the value of the cryptocurrency, resulting in a profitable outcome.

Yes, Blockchain and Artificial Intelligence are not the Same