Dogecoin is a blockchain based peer-to-peer cryptocurrency that was introduced into the crypto market as a “joke currency” due to the likeness for Shiba Inu dog from DOGE meme. It rapidly exploded into the market, controlled solely by the power of online communities to help it rise. Dogecoin was introduced into the market of December 06 2013. Due to its popularity between the internet users and the communities, it reached a capitalization of USD 60 million in January 2014. It had a huge initial coin production. 100 billion coins were mined and circulated by mid-2015. By mid-2015, the 100 billionth Dogecoin had been mined. Dogecoin was introduced to keep the market fun and fresh and to avoid the shortcomings of other cryptocurrencies including bitcoin. 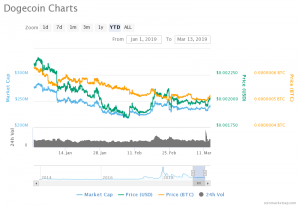 Based on CoinMarketCap’s analysis, Dogecoin is ranked 26 largest cryptocurrency and its market cap value is $240,982,218 USD for the 24h Volume of $22,003,552 USD on March 13 at 11:24 UTC. This is based on the total circulating supply of 118,626,632,663 DOGE coins. The current market value is relatively higher compared to its corresponding value on February 11 of USD 226,557,981. There has been a 6.37% hike from the past. The Mcap value was as high as 276 million at the beginning of January 2019. However, the market has been on a downtrend after touching 284 million on January 02 at 04:34 UTC. Although moderate, the recent values show that the MCap values have been on a steady rise from February 08. The 20-day EMA also displays an uptrend on comparison with the present-day values. The differences between the values have progressed by a very negligible percent though. The overall rising value puts the digital currency on a bullish pressure.

The 14-day moving average shows the values going uphill with a negligible percentage. The overall market moving uptrend gives the bulls an upper hand. Hence, it is an investment time for investors to get long term benefits. Traders can also take advantage of this rising market to earn a significant profit from their transactions. Investment from traders will increase the value of the cryptocurrency in the future. However, check on Dogecoin Price Prediction because as an active trader you always want to keep an eye on the coin’s future price updates so come here and be knowledgeable.