Started with a meme on Shiba Inu – a Japanese breed of dog – Dogecoin (DOGE) came into existence on Dec 6, 2013. Created primarily for digital tipping on sites like Reddit and Twitter for sharing quality content, Dogecoin is secure, decentralized and provide total anonymity. Billy Markus created dogecoin from Portland, Oregon and Jackson Palmer from Sydney, Australia. Their vision was to fabricate a coin that is fun, light-hearted and has an appeal beyond the core Bitcoin audience. Dogecoin charges significantly lesser in comparison to other cryptocurrencies as the value of an individual token is less. 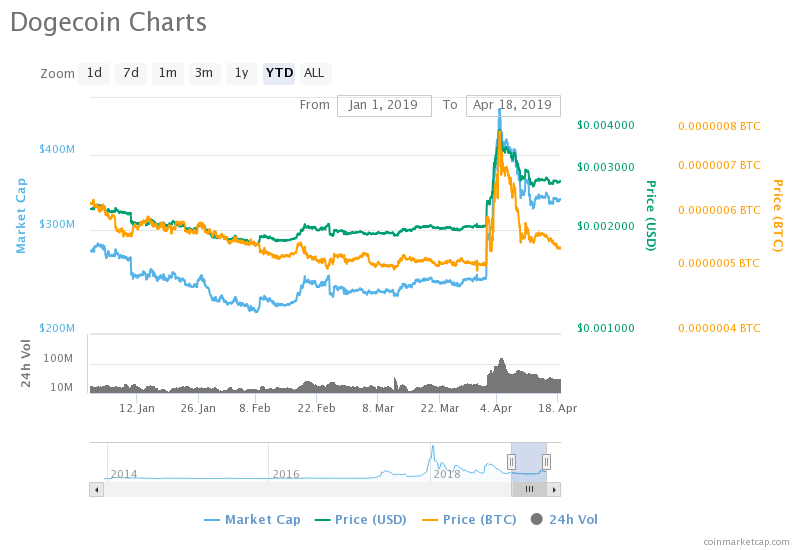 Dogecoin (DOGE) continues to be one of the most sought-after cryptocurrency with its current win against both USD and BTC. However, it is too early to reach any conclusion regarding what may happen until the end of 2019. But then also, check on Dogecoin Price Prediction, so that you will get an idea about what will happen next regarding its price. Nevertheless, the current commitment in Dogecoin may lead to bullish trends in the crypto sector in the coming days. The relatively low transaction volume seems to be an advantage for Dogecoin, as it does not hamper market liquidity. For most Altcoin, low volume is considered too poor for future gains. However, this does not seem to be a problem for Dogecoin (DOGE) and further helped it in strengthening its market position. On the technical front, Dogecoin seems to be entering a big bull season as of now and can bring profit to the investor in the short term. Not to forget that Dogecoin (DOGE) has, time and again, proven that it is the industry’s most stable crypto coins. And this has caused Dogecoin to lose much less value than expected. Its value will always be of great interest to the crypto-currency industry, regardless of the direction in which the price goes.

Bitcoin (BTC) Predictions: BTC Crack Down Resistances, Aimed at a Fresh Mark at The Top of Bollinger Chart

Tron (TRX) Price Analysis: TRON will Make it to the Top 10 with Tether Integration