Dogecoin (DOGE), at the time of writing, was trading at $0.001838 after hitting a weekly bottom at $0.001614 and is drawing a clear yet subtle uptrend on the daily chart. Moreover, the crypto market has been fetching gains amidst the prodigious spread of Coronavirus around the world, and all the investment avenues have surrendered and marked massive selloffs. Alongside, Dogecoin is believed to have a concurrent motion with that of the king of crypto—Bitcoin and impressively, the latter is also maintaining a persistent move above $6k and even $6.5k.

Comparing the price trends of Dogecoin and Bitcoin against the American Dollar, we see that both the cryptos have been maintaining an almost similar momentum. That said, we see that just when BTC had hit around $6.9k, DOGE price marked a weekly high above $0.0020. The uptrend is fine yet affirmative for both the leading cryptos as the crypto market prints profit amidst the other investments facing a dearth of steady momentum.

Looking into the technicals of Dogecoin on the intraday chart, we see that the price trend is above 50.0% Fib Retracement level. The 20-day Bollinger Bands laid are seen squeezing, which means the price trend of DOGE is likely to breach above the upper Band, as per the current momentum and support. The coin has retained imminent support from the 50-day, and 200-day Moving Average as Dogecoin maintains the uptrend that was initiated over the past 7 days.

Yet, according to Dogecoin Prediction, the MACD appears flat with neither the bullish nor the bearish divergence due to constant price accumulation over the past 24 hours, which is likely to rebound. The RSI of DOGE holds around 51.36 and holds no trading extremities. 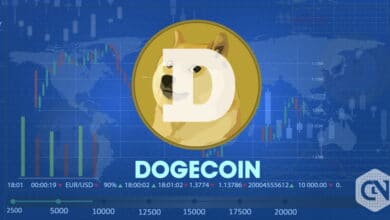