Dogecoin can be associated with the changing price trends over the years, but its resolved and proven track record of being the highest valued meme coin has been untampered. Currently, it is ranked 12th in terms of market capitalization and worth a whopping $18,499,756,186 in total circulation.

March 24, 2022, would be the third consecutive buying spree for Dogecoin; the first such trend was in March 2021. The relaunch of its blockchain foundation puts a renewed focus on promoting the future of the Dogecoin blockchain ecosystem.

Many developments happened in late 2021, and it so happens that progress on the blockchain ecosystem would benefit current investors. For the first time since its launch and mass acceptance, Dogecoin is moving towards a community-driven service offering cryptocurrency. Dogecoin eyes another milestone in the crypto-world.

Technical data on its price momentum shows an increased buyer participant in March. It would be complicated to predict whether it’s just a facade into trapping new investors or a massive opportunity that most would enjoyably miss out on. However, you can know more about the DOGE price prediction here! 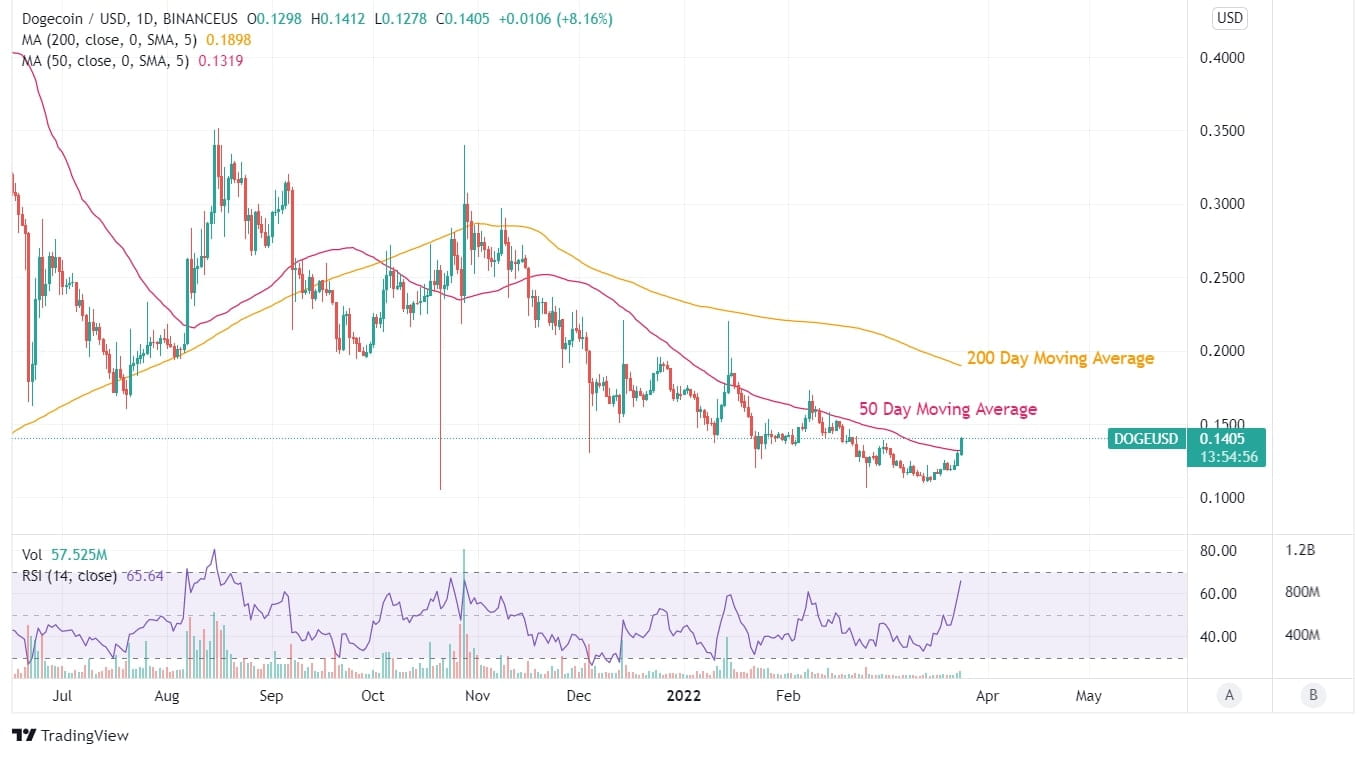 Dogecoin’s demise from its highs in May 2021 has steadily declined. Profit booking has happened over Dogecoin since May 2021, and prices have stumbled beyond 80% as per its recent low valuations. Creating a fresh low with every swing was not a buying-worthy price trend, but the current valuation shows a strong profiteering potential if the prices take off from these levels.

It will be a 450% gain to match its previous high levels of $0.78. As investors, if someone intends to diversify their portfolio with some risky but potentially high returning cryptocurrency Dogecoin should be on their watchlist. RSI rising from oversold zones to overbought zones within a month presents a fair picture of increased buyer sentiment.

This happened despite a limited 25% to 30% movement that forced buying at low levels to hold the tokens for a higher return creating a supply crisis. While such a scenario is quite far-fetched considering Dogecoin’s 132 billion tokens in circulation, it could create a temporary rally.

Will Shiba Inu (SHIB) Be Able to Target 200 DMA