Dogecoin breaking its significantly important moving average of 50 days during the May 12 crash was indicative of a long-term bearish movement. However, the quick decline of the 50 DMA curve brought it face to face with a bullish crossover scenario.

In the last two weeks, Dogecoin has jumped significantly without showing any weakness of consolidation. A minor consolidation developed between June 12 and 23 was broken, and DOGE is headed towards previous resistance levels.

Testing the previous levels would bring a positive sentiment across buyers, and this time DOGE doesn’t even have the support of a trending Bitcoin. Support from Elon Musk has always been vocal, and it’s not fresh news that could have impacted the price momentum. The candles, too, showcase a clear buying sentiment as the current trading value is simultaneous to the post-May 12 crash support levels.

Dogecoin currently possesses a market capitalization of $10,356,142,667, with the coin moving 11% up in the last 24 hours. Such values are a great indicator of crowd buying that could help Dogecoin sustain the downtrend pressure from the profit booking trends in the coming days. With some sustained buying, Dogecoin will be in the position to counter May 2022 crash values with the attempt to jump above $0.16.

Dogecoin breakout from its consolidated price zone, rising to buy sentient indicator and strong daily candlesticks indicate a possible and consistent buying momentum. The extreme bullishness showcased by the price trend of Dogecoin will help with further gains in the coming days. More about future price gains and important buying levels in the detailed Dogecoin prediction. 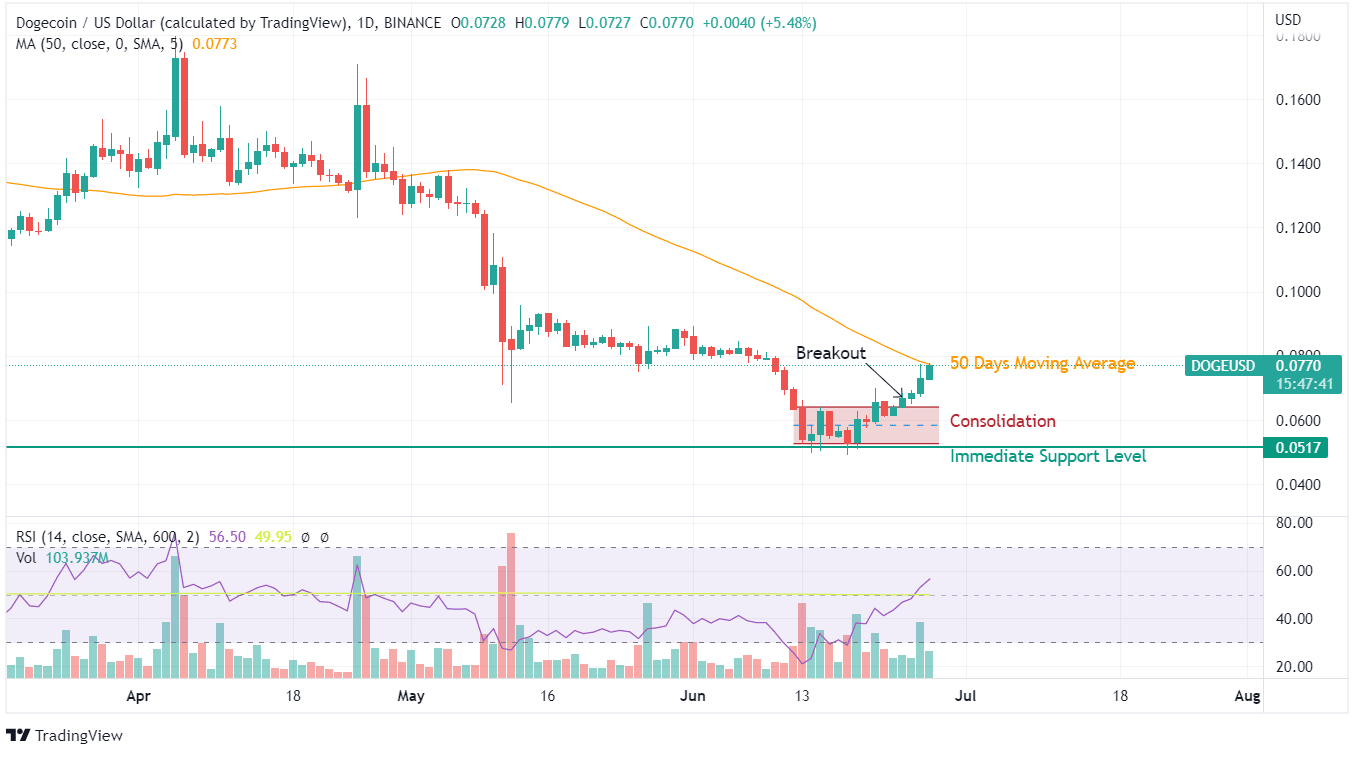 Dogecoin candles on Sunday last week attempted to breach the 50 DMA curve but failed. Monday blues have continued with the buying sentiment as DOGE touched the 50 DMA curve again, which can sustain if profit booking can be controlled in the next two weeks.

What’s amazing is the rising curve of the RSI indicator that jumped from a fair play level of 30 to 57 in less than ten days. This big move could indicate further price hikes in a sustained environment as Dogecoin would further attempt to test the 200 DMA curve and 100 DMA curve.

The $0.10 mark should be the next significant level that could induce some volatility in the coming days, but there shouldn’t be any major issues with Dogecoin. A breakout level of $0.0650 has pulled up the support and should induce more buying to control the price trend. Consistent daily gains have created a renewed sentiment that wasn’t visible since the last peak levels in November 2021.

CashFi (CFI) & The Sandbox (SAND): Are These Altcoins High-Risk Purchases?