Dogecoin is a peer-to-peer digital currency, which supports decentralized transfer, enabling the users to send money online easily. The Dogecoin had one of the fastest initial coin productions. It had around 100 billion coins in circulation during its first year, and an additional 5.256 billion coins were added every year after that. The coin majorly gained traction in the internet tipping system, wherein social network users gave away Dogecoin as tips to other users for presenting unique and exciting content.  Billy Markus created dogecoin. He proudly claims that along with the Dogecoin, the Dogecoin community is also unique and very friendly. It’s been reported that the Dogecoin community has helped its members who were hacked, and they also support some interesting charity cases.

DOGE was invented as a playful cryptocurrency with the motive of reaching out to core users of Bitcoin and other cryptocurrencies. The network of Dogecoin had initially intended to produce 100 billion crypto coins. Within a few days of its launch, the value of Dogecoin nearly jumped 300 percent in value, rising from USD $0.00026 to $0.00095. But just three days later it witnessed its first major crash of 80%. This sudden drop in value happened due to extensive mining pools seizing. 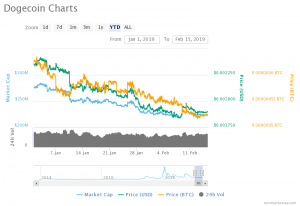 Currently, Dogecoin is ranked 24th in the cryptocurrency market. As of today, the total market cap value is $224,705,305 USD at 13:24 UTC on 15 February 2019 slashed in current value by 12% concerning the level on January 20th. When considering the highest value of market capital this year, which is 284,482,129 USD on 02 January 2019 the current value has witnessed a 21 percent decrease. The competitive pressure and bearish moments are the primary cause of the decline in value. But still, many investors believe that Dogecoin is a safe bet and has the potential to increase drastically in value.

The downward trend as seen from the above graph is a sign of the coin reaching a threshold point.  A more in-depth analysis reveals that this landslide of Dogecoin might be the start of a bullish trend.  The current value of USD and BTC are $0.001899 and 0.00000052 with a 24hr volume of USD 16,451,345. It is very evident from the chart that there is a massive dip in the USD value. This dip happened on 10th January 23:34 UTC due to weakness shown by the American dollar in the cryptocurrency market. Thought the Mcap value and the BTC value recovered considerably, USD went on to reach an even lower state. The current trend of Mcap and BTC value seems to be stabilizing. Though this mark is lower than what it started during the beginning of the year, the sign of bullish trend is keeping investors hooked to this coin.

The digital peer-to-peer currency features a likeness of the Shiba Inu dog from the meme. All current status of Dogecoin for short term investors are pointing towards a sell. When we look at the EMA estimation for 20 days, the value comes to 0.00000058.  Relative strength index, on the other hand, remains neutral with a value of 45.32630500. Going with various analyst opinions and the graph movement, people with long term investment goal should wait as a bullish trend is expected soon.