XEC cryptocurrency is a major fork of Bitcoin; one can even call it the latest iteration of the BTC source fork. XEC is also called eCASH and carries the fork genes of BTC and Bitcoin Cash (BCH). Originally named Bitcoin Cash ABC or BCHA, it was announced to convert all existing BCHA tokens to XEC at 1:1 million.

The project valuation of XEC stands at $1,028,091,861 and a total supply of 19,081.42B tokens. A low per token valuation allowed XEC to enjoy sudden price elevations. In modern times, XEC combines the Proof of Stake algorithm used by BTC with an Avalanche consensus layer.

The key improvements have been focused on improving the total transaction volume per second, enabling eCash to provide 100 to five million transactions based on its complexities. The eight decimal place value has so far been a boon for XEC holders who are still not in severe losses as compared to the peak value buyers of many known cryptocurrencies.

The long-term vision of XEC developers is to support Ethereum Virtual Machine (EVM) and offer interoperability within the DeFi ecosystem of Ethereum. XEC developers have already created a roadmap to achieve and grow its ecosystem.

eCASH jumped significantly in September 2021 and has returned to its original value of $0.00005000 in June 2022. Currently, it took support from an immediate buying zone created by enthusiastic buyers near $0.00002978. XEC has already recovered considerably from its recent lows of May 2022.

Before investing in XEC, traders should do their own research and explore our XEC price prediction to know more about the future price trend for the eCash token! 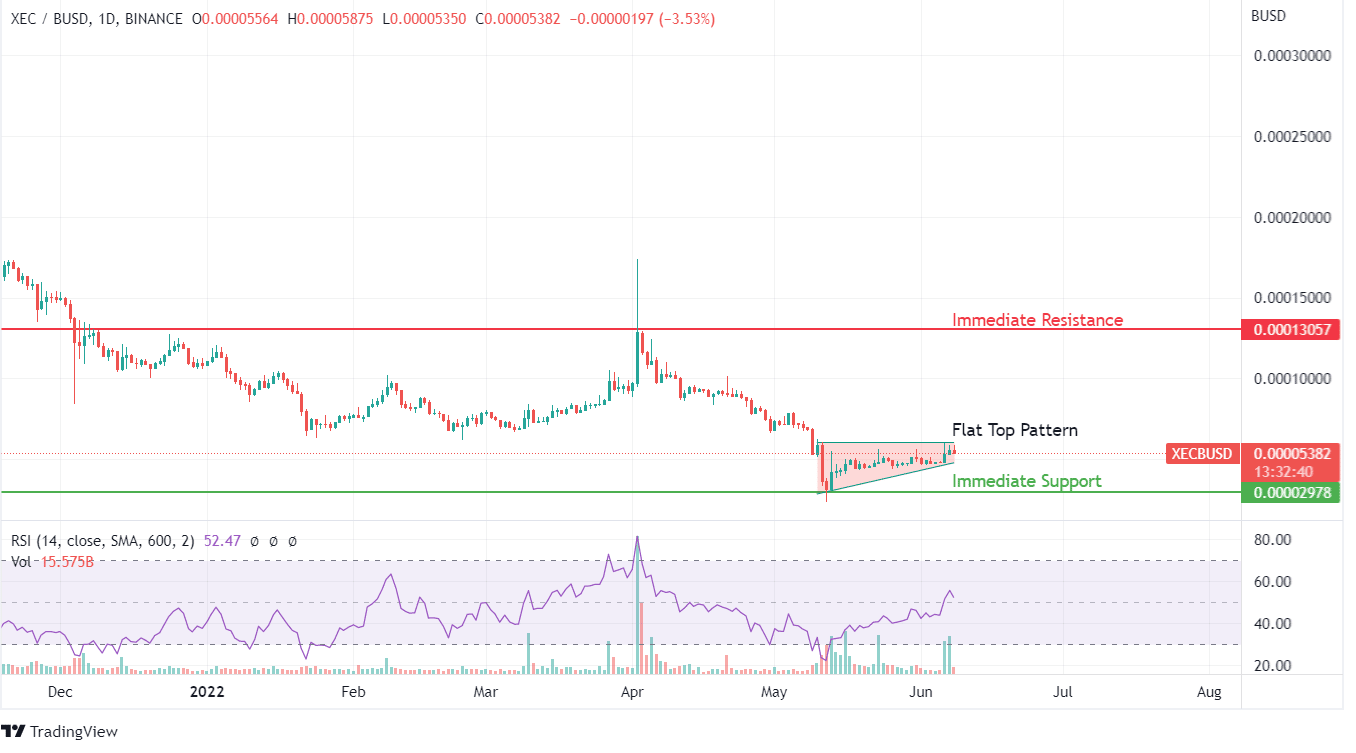 XEC token attempted a good breakout in April that showcased a rise in both RSI and transaction volumes never witnessed before on XEC. Currently, XEC is showcasing some potential to create positive sentiment and reel in more buyers at its current valuations.

The $0.00006000 has become a sort of top for the current price trend, and breaching this level can bring more buyers to the fold. Despite this, the immediate resistance of XEC forced multiple pushbacks in values.

A decimal place above the current trading value would require the eCash tokens to climb decently to sustain. There have been multiple instances of double-digit market gains for XEC holders, and this is something that fascinates buyers of the eCash crypto token. RSI at current levels shows bullishness, and the same can be confirmed from its rising transaction volumes.

The Mercedes-AMG Petronas Collaborates With FTX To Launch NFTs

Is It Right Time to Buy ETH Amid Advancement of Ethereum Ropsten?