Electroneum is a mobile-first cryptocurrency aimed at mass adoption and is built off Monero codebase to allow for transactions on a decentralized blockchain. Electroneum’s one-time public key prevents recipients funds from being linked with their wallet, resolves the security issue. The recipient gets their funds through their wallet’s private view key which scans the blockchain. Transactions are faster with dynamic fees. The more interesting feature is the ability to perform mobile mining through the phone’s CPU. Though mobile mining will not confirm the creation of new blocks, however, rewards will be given to the miners. 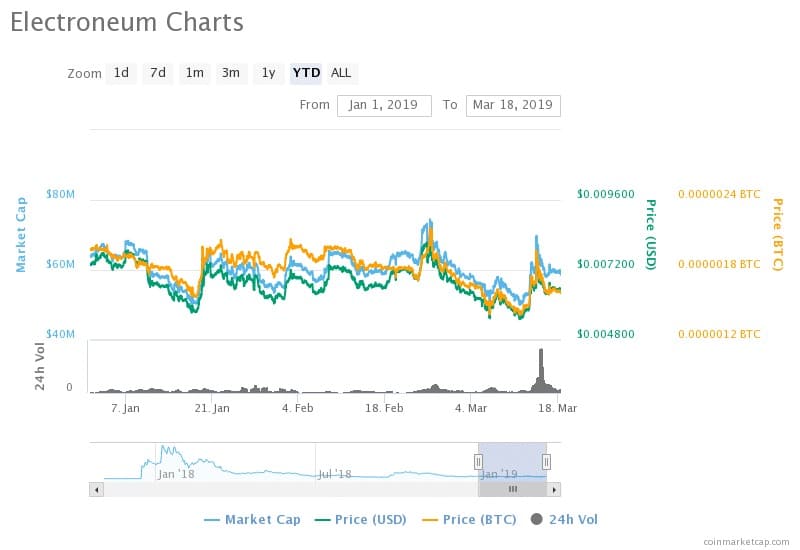 Electroneum is ranked 82nd cryptocurrency in the market, based on the analysis from CoinMarketCap. The current MCap value of ETN is USD 58,654,418 for the corresponding value of $400,961, which is influenced by the total supply of coins in circulation which amounts to 9,119,697,027. The market cap value of ETN has been majorly range bound. The MCap traded at 64 million USD at the beginning of January, the volatility of the coins had the values bouncing between highs and lows. ETN reached its all-time high of $72,613,283 on February 25, 23.80% higher than the current value, and touched its lowest value of USD 50,152,705 on March 11 which is 44.78% lower than the all-time high. The 14-day EMA exhibits an uptrend with an insignificant percentage difference. The value rose from $56,383,117 on March 04 to the current value with a 4.03% increase. This gives the bulls an upper hand.

The 20-day exponential moving average displays a downtrend in the market with the values decreasing from $63,456,062 to the current value with a 7.57% fall. The volatility of the digital currency that affects the market and the differences in the percentages of the moving averages proves the bearish pressure on the market. Hence the market balance points in favor of the sellers. Investors with long term investment plans will have to sideline themselves and explore the market. The investments would work beneficial when market growth is stable. However, the trades with the short term investment plans can utilize this volatility to earn profits. Their contribution to the currency will increase its value in the future.

Tether’s Reserves Are Not What They Appear, Discloses the Company