Electroneum is built off Monero codebase to allow for transactions on a decentralized blockchain and a mobile-first cryptocurrency aimed at mass adoption. It overcomes the shortcomings of bitcoin’s privacy issues. Electroneum’s stealth address, a one-time public key that prevents recipient’s funds from being linked with their wallet, resolves the security issue. The recipient gets their funds through their wallet’s private view key which scans the blockchain. Transactions are faster with dynamic fees which are based on the amount of traffic on the network. The more interesting feature is the ability to perform mobile mining. The app will allow your phone’s CPU to engage in stimulated mining and rewards will be given to the miners. 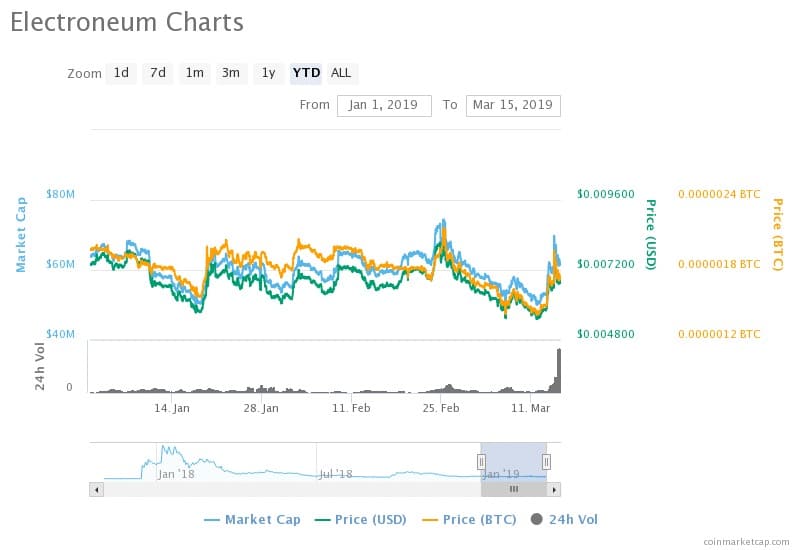 As per analysis from CoinMarketCap, Electroneum is ranked as the 77th cryptocurrency, and it’s market cap value is USD 61,402134 for the 24h Volume of USD 1,753,222 on March 15 at 14:04 UTC which is higher than its relative values of USD 58,297,448 on February 15 by 5.33%. ETN traded over 64 million USD at the beginning of January after which the market toppled. The market value of this cryptocurrency has been very turbulent due to the volatility of the cryptocurrency. The Mcap value of ETN reached a peak of USD 74,497,159 on February 25 at 07:34 UTC and its Lowest, recently of USD 50,204,603 on March 11. The current values are an intermediate between the highest and the lowest with a percentage difference of 21.33% and 22.30% respectively. The 20-day EMA displays a downtrend on comparison with the present-day values. The differences between the values have regressed by 9.97%. This market trend puts the digital currency on a bearish pressure.

The 14-day moving average shows the values going uphill from $60,527,467 on March 01 to the current value with a negligible 1.45 percentage increase. With the percentages of both the moving averages minute and the overall market with sharp rises and falls, bears hold an upper hand. And, with bears ruling the cryptocurrency’s market, investors with long term investments must sideline to observe the market trend. However, Traders can take advantage of this fluctuating market to earn a significant profit from their transactions. Investment from traders will increase the value of the cryptocurrency in the future.