ETN or Electroneum is a British cryptocurrency that was initially developed for mobile gaming and online gambling markets. Since then, ETN is aimed to be a cheaper, faster and mobile friendlier cryptocurrency. ETN has its basis of its own bitcoin derived blockchain, and its developers claim that it is the world’s first common cryptocurrency. According to the ETN developers, it has all the benefits of a bitcoin and other cryptos but, it is much more advanced than other digital assets. It may sound good with the promises and claims of its developers but, in reality, the picture is somewhat different. ETN has been running on a bearish trend for the past few days, and it has repeatedly failed to gain a number of users. The reason is that promising is easy that delivering, in reality, is difficult and this is quite evident from the heading itself.

ETN is currently valued at USD 0.005877 (UTC time 06:02). It has occupied the 75th position among the cryptocurrencies that are currently getting traded. Its present market cap has a value worth of USD 53,173,007. Currently, 9,047,455,397 ETN are available in the crypto exchanges to trade with. Compared to yesterday’s price, the value of ETN has been decreased by -5.61%. It bearish trend has been persisting for long. 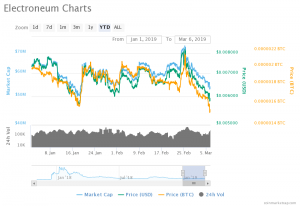 What the future holds for ETN?

The crypto predictors and technical analysts point to the several factors which are making ETN losing it’s worth considering, and according to them, there is no probability of ETN to be upraised till now. ETN has appeared to be hollow crypto as it lacks even minimum technical expertise on its generic ICOed fork of Monero. It released Beta iOS after several missed deadlines. One has to activate its app every seven days to do cloud mining. Taking all these considerations in mind, the predictors assume that by the end of 2019, the price of ETN can be around $0.74. According to Market Trends and Technology, the value of ETN by the end of 2020 can be around $1.10. According to Wall Investor, one’s present investment on ETN can be completely devalued in the future.

From the price predictions and analysis, it is cleared that ETN is definitely not going to make any big achievements in the upcoming days. Before 2020, there is no probability of ETN to regain its value to some extent.

ETN should be able to capture its goal in a true sense. It must focus on increasing its user base so that it can have a big market of approx. 2.2 billion smartphone users in the future and then only, it can be able to increase its value gradually. Otherwise, its bearish trend will be persistent.

No! EOS Developer Dan Larimer is Not Joining Tezos