Electroneum is a recently launched British cryptocurrency which has been brought via an Initial Coin Offering (ICO). It has been developed specifically for mobile gaming and online gambling markets. According to its developers, it can be the most user-friendly cryptocurrency in the world with possibilities of coin mining and wallet management on a mobile app. Electroneum is a bitcoin derived blockchain that has been tagged as “the world’s first common cryptocurrency.” ETN’s users’ interfaces are really easy, and for the non-technical users, this can be a perfect digital currency. It has been designed keeping in mind about mobile friendliness, fast transactions, and easy micropayments. 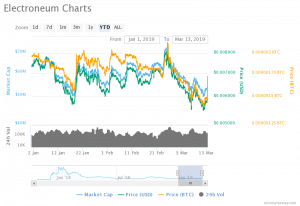 Electroneum had reduced its worth significantly in 2018, and it dropped its prices by 30 times. This was because its platform had not been in function to the full extent. To some Reddit users, ETN is the future, particularly due to its facilities of instant payment technology and mobile miner. From the beginning of 2019, its teams had the plan to operate its platform to the full extent by the first six months. So, until July 2019, it is very unpredictable to determine the tendency of the price range of ETN. According to the technical analysts, this crypto can get listed in exchange like Coinbase, provided; there is mass adoption of this crypto and obviously, full functionality of its platform.

Considering all these points, we can say, ETN is definitely not a trusted cryptocurrency till now. It’s highly fluctuating and it is better for the investors to be aware of its performances and updates so that they can make the right decision at the right time.