ETN is a mobile cryptocurrency that is specifically designed for mass adoption, and it is aimed to provide smart and extra simple user interfaces to smartphone users. ETN is focused on speeding up microtransactions, making payments for apps, purchasing mobile games and sending money to friends. ETN has not made up to the expected mark in spite of having the feature of mobile mining but, in this year, it will come up with many advancements that are likely to praise the value of ETN. 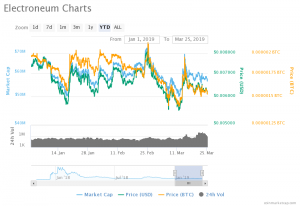 The developers of ETN are currently working on an API which can allow easy integration to accept ETN instantly. Their instant payment API is still in BETA form which is to be updated this year. With these developments to come, it’s hard to say how well ETN will perform in the future. Although it observed a viral growth in its community in social media other than Facebook and Twitter, it’s still under improvements. Until it is performing that high followed by mass adopting, it will be hard for ETN to keep up the pace with the crypto market.

It is better to wait to invest in ETN. The crypto market is highly volatile now, and ETN is also under developments. Until there is any significant upraise in its value, it will be a futile idea to invest in this crypto.