Electroneum (ETN) is a mobile friendly cryptocurrency that was launched with the aim of mass adoption. It is built off the Monero codebase, and it enables transactions on a decentralized blockchain. Like Monero, ETN too has some privacy features. In the case of Bitcoin transactions, the privacy of the sender and receiver gets hampered as their wallet address remains public. This is not the case with ETN. It has a stealth address and one-time public key that restricts recipient’s fund to get linked up with their wallet. 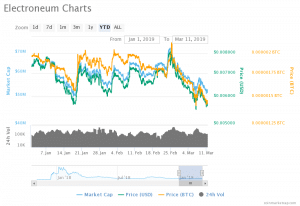 One can operate this mobile app with zero technical knowledge. ETN is built for the people who allow users to store their digital currencies in ETN’s mobile app. It is user-friendly, and the main issue that it is facing currently is its mass adoption. It has still not made it to a major expansion. Its price can explode once it reaches to global investors and users. It has promising user interfaces, and its simplicities are sufficient enough to woo users all around the globe. It is estimated that by the end of this year, it can have an $8 billion market cap and each ETN can be worth $1.

Taking all these considerations in mind, ETN can never trade at $100 this year because this just simply implies it will have a $600 billion market cap by the end of 2019 which is impossible. Timing is all in the crypto sphere but, we think that as ETN will grow, there may be a day when it can reach to $100. By the end of this year, it is assumed that its price will be within $1-$10. So far its technology, earlier performances and market trends are concerned, the crypto analysts predicted that it could be around $0.74 by the end of this year. In 2023, its value can spike up to $2.44, and by December 2020, it can be around $1.10

Value of ETN can hike up in future provided it reach to a significant number of users and investors. ETN has a promising technology and easy user interfaces which can draw the attention of global investors. With more number of users, it will be easier for ETN to regain its value more steadily.