Dogecoin (DOGE) is one of the major cryptocurrencies of contemporary time as it deals with transactions based on online social media specific contents. It was created after being taken out of Litecoin in 2013. The major features of this crypto include complete anonymity of the users and swift transactions. This has been able to provide a substitute payment and settlement ecosystem for social media content creators and clients specific to Twitter and Reddit. The theme and logo of Dogecoin (DOGE) are based on “Doge“- a popular internet meme of a Shiba Inu dog. The creators of the coin are Billy Markus from Portland, Oregon and Jackson Palmer from Sydney, Australia- they aim to take the market leading place of Bitcoin.

The starting of April was really positive for Dogecoin (DOGE). On April 1st, Dogecoin posted an April fool’s Day Poll asking who should be the next CEO of Dogecoin. People voted highest for automobile major Tesla’s CEO Elon Musk. In response to that poll, Elon Musk tweeted light-heartedly that Dogecoin (DOGE) is the best crypto coin in the market. Soon, the statement traveled like fire finally pushing the price of the coin to a very high level. The almost 100% growth in the value left many experts and crypto enthusiasts in shock. The whole crypto market has inflated after April 1st, but near 100% growth was not according to the market.

We have listened to your concerns. We have decided that Dogecoin does need a CEO. Someone who can lead us into the future while maintaining the core values of what we are.

Now the fire seems to have dozed off. The coin has been stable for the past week. But it is now being traded with more price than before the April fool episode. It has gained almost 40% on the previous price. All thanks to market interruption by Elon Musk with one joke. It should be noted that Elon Musk was recently penalized by the SEC (Securities Exchange Commission) for interrupting market trend of Tesla’s share by making false statements on Twitter. This cost Elon Musk $20 million and Chairmanship over Tesla’s board.

Trust Wallet has trusted the Doge-

Trust Wallet- a major crypto wallet backed by Binance coin has decided to add Dogecoin (DOGE) in its wallet. It said that the vibrant and amazing community of Dogecoin (DOGE) would be welcomed to Trust Wallet. Trust Wallet is considered as one of the few efficient wallets. It has many major cryptocurrencies like Bitcoin, Ethereum, Litecoin, Tron, XRP and all ERC20 tokens currently. Trust Wallet assures to store digital assets along with the private keys. It also offers complete anonymity of the users and privacy is of paramount priority.

The addition of Dogecoin (DOGE) is positive news for the coin. This might not have swelled the market value for now, but it has definitely managed to push the goodwill of the coin.

Dogecoin (DOGE) has finally put its name to the perfect use. Dogecoin has recently tied up with Huobi, Huobi Global’s U.S. crypto exchange for raising money in order to provide funding for Grateful Dogs Rescue, a dog shelter based at San Francisco.

According to the joint press release, Huobi Global plans to give a Dogecoin each to the users who pass the verification in signing up process. It also would give 1,000 DOGE for each registered user to the shelter house with a limit of $5000.

“Dogecoin has become the darling of the cryptocurrency community with an impressive market cap that currently exceeds USD 350 million,” said Frank Fu, the CEO of Huobi.com operator HBUS. “We are excited to support projects that have such widespread appeal, and we will continue to expand our token variety aggressively.”

Dogecoin has also said that they were looking forward to the association aimed at a good cause. The tie-up is consonance with the Dogecoin’s strong values and commitment towards charity.

Here are Top 2 Dogecoin Wallets in the Crypto Market –

Trezor is one of the most trusted and efficient hardware wallets for Dogecoin (DOGE). Along with Dogecoin, it has almost 700 other major cryptocurrencies in its bucket list. SatoshiLabs of Czech Republic back it. It emphasizes the most on privacy and security. The private keys to the crypto coins are kept in the device the app is installed in. So, it makes it tough to be hacked.

This wallet is known as the old school crypto wallet. The private keys to the coins stored are printed on a piece of paper. This makes the app safer as it is not connected to the web. The onus is rested with the user to keep the private keys safe in order to have his investment safe. 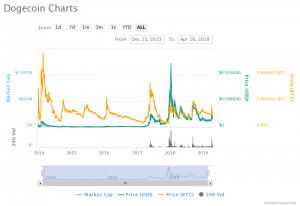 Dogecoin (DOGE) has been a consistent performer since its inception. The coin was never intended to be a major crypto coin as this was often described as a coin made out of the fun. However, the first uptrend was seen in May 2017. And the biggest gain could be seen during the crypto boom. It gained around 100% in the period of 6 months. But the effect of crypto winter was huge on Dogecoin.

Dogecoin (DOGE) is now being traded around 0.002 USD. But the price of the coin is likely to increase further. But this growth will be gradual. The next resistance can be faced at 0.003 USD. The short-term outlook is bearish as the effect of the April 1st episode has not completely worn out. But the medium and long-term outlook is bullish. The end of this quarter may see the value somewhere around 0.01 USD.

As per our experts’ opinion for future of Dogecoin, the coin should be there at 0.055 USD at the end of this year. It is a very bullish sign for the long-term holders. And the 2020 price prediction goes with a whopping 5855% increase in the price. The value may reach as high as 0.225 USD by the end of 2020.

Dogecoin (DOGE) is available for buying in many major exchanges like CoinAll, FEX, FatBTC, ZBG, and P2PB2B. Dogecoin is extensively being traded in these major exchanges. Looking at the price trend and analysis, we advise the short term investors to wait for some more time to book the coin. The price may further take a dip. But, medium-term holders must have benefitted from the April 1st surge. We advise them to hold the current holdings until the end of 2019. It will give more than expected dividends.