When it comes to the blockchain, it does not just impact the real world but has a more significant impact on the digital world. The term NFT must be confusing, but since the rise in application of NFT based tokens, one must know about their possibilities.

Non-fungible tokens are not that difficult to understand. It is essentially a data unit stored in a digital ledger. Anything digital, be it a tweet, an image, video, or another digital file, can be represented through NFT.

How is Enjin Coin so important?

Enjin is an NFT issuing platform that emphasizes gaming inventory. These days game developers or owning companies have a centralized method of selling inventory items. But at the same time, they have the power to shut down a user account that may have thousands of dollars worth of digital inventory. Imagine those inventory items being issued as an NFT. Under this condition, the buyer would have complete control over their purchased item and not the company, making the process a decentralized one.

Since Enjin focuses mainly on the gaming world, this development and its acceptance by broader game developers and audiences can become disruptive for the traditional gaming industry. The standard in-game items are worth nothing outside the game, and as new games are released, the craving and value of the most expensive items depreciate. Enjin enables game developers with a simplified method to build games with in-game NFT items. Enjin would allow gamers to find, buy, trade, and even store the in-game items as blockchain assets.

Creating an NFT item is called minting, and it can be reversed back to the original form in a method called melting. All the NFT items carry a certain amount of Enjin Coin, and since these coins have a real-life value, the NFT items also carry a specific value in terms of Enjin Coin in the real world. Some games are even offering Enjin Coins as a reward which can be used to purchase in-game items. 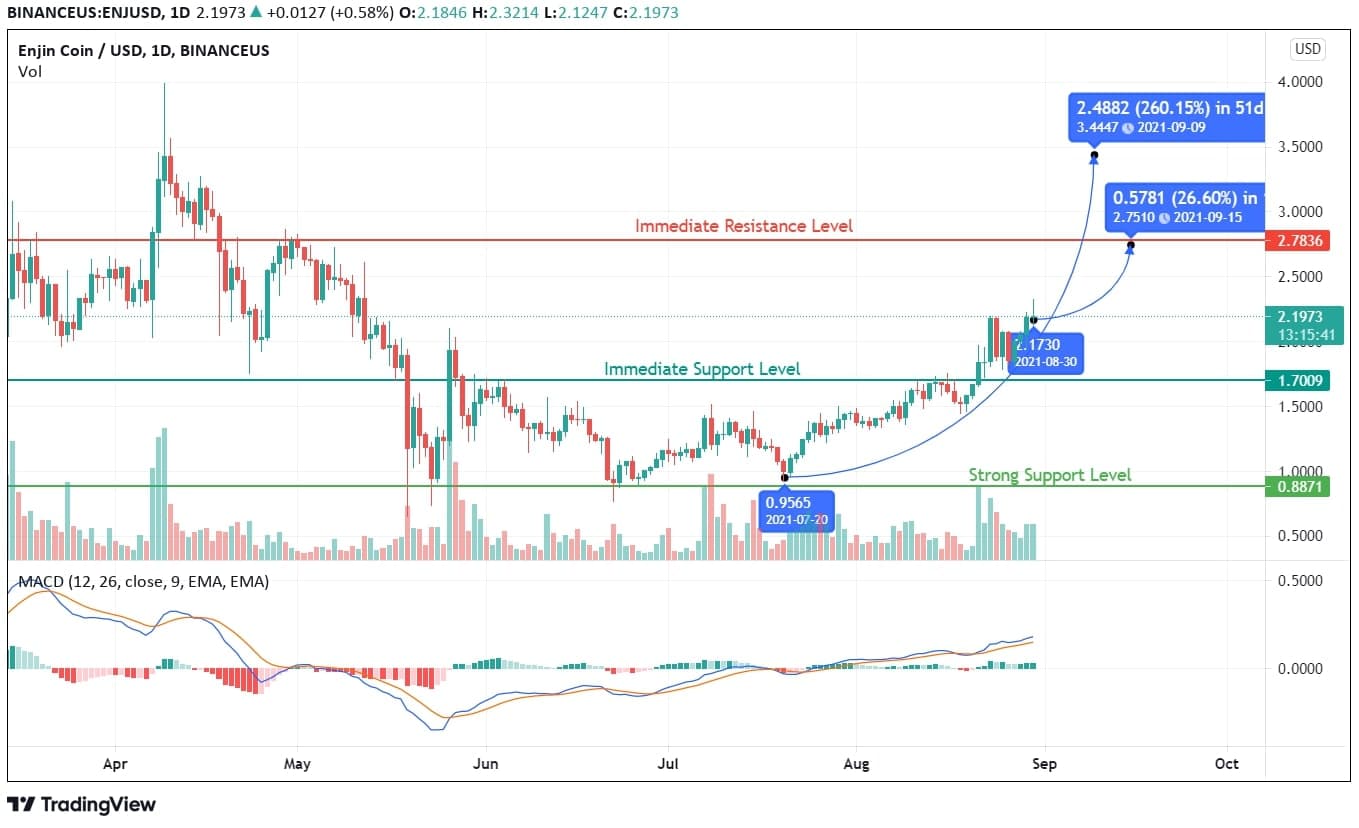 Given the rate of transformation in which digitalization is increasing, we can expect NFTs to become a more easily held asset in years to come. Now since Enjin has some application in the digital and real worlds, one can expect the value of the Enjin Coin to rise in the years to come. So far, we had witnessed it deliver a 100x return when it crossed $3 in April 2021.

The all-time high of $3.99 is close to being retested given the consistent volumes and increasing price action over the last month. Enjin can efficiently deliver 26.6% once it retests the immediate resistance of $2.78. When comparing the possibilities in 2021, from a low of $0.924 on 20th July 2021, we have reached a high of $2.32 levels, making it 141% of returns in less than six weeks.

Enjin Coin has a substantial price action with a consistent divergence. In short, the ENJ coin is trading in the green zone with a strong buying sentiment. The 200 DMA line sits together with the $1.70 support level. 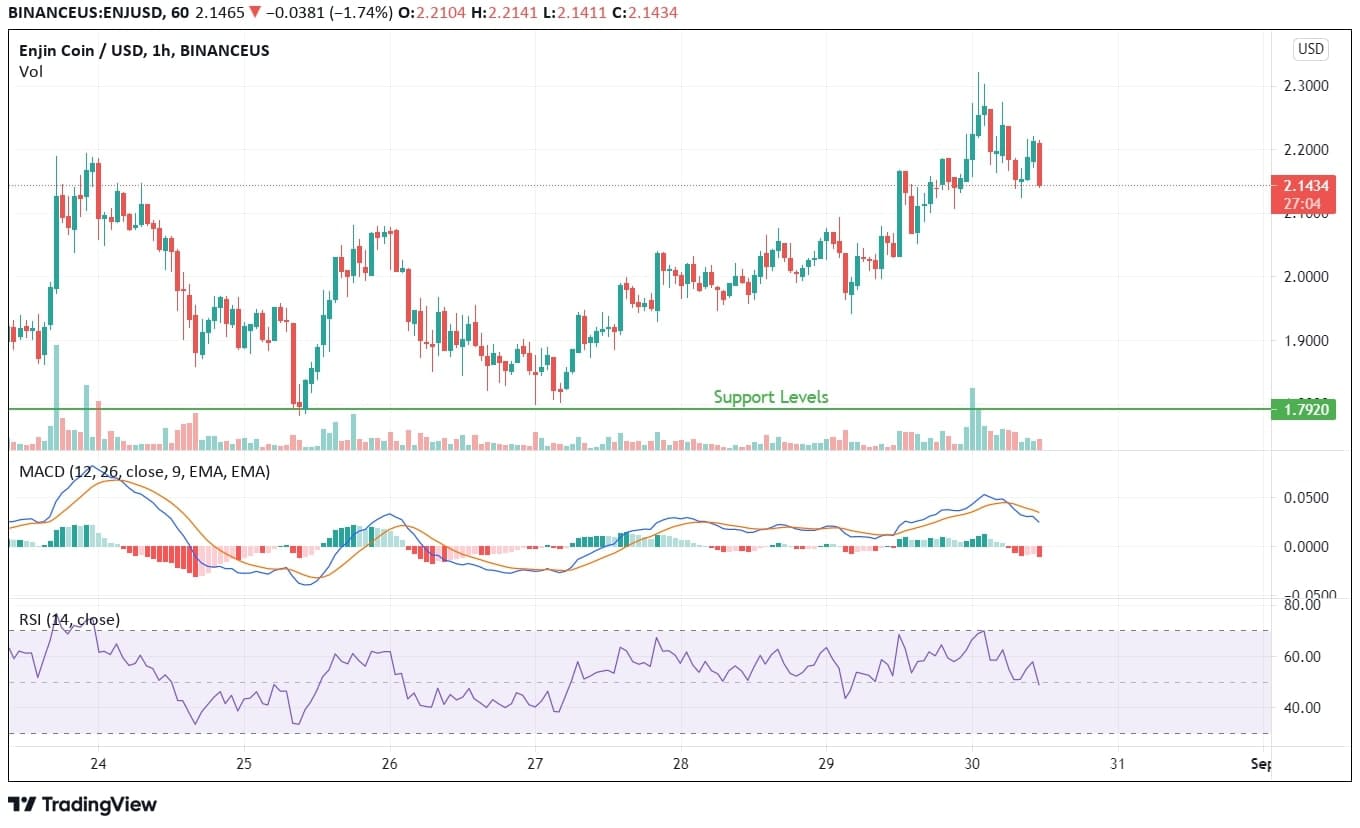 On hourly charts, the Enjin Coin is trading with an inclining trend. After taking back-to-back supports from $1.80 levels, we have seen multiple attempts to sustain above $2. The consistent buying action on the last hours of 29th August helped it reach a new monthly high. Any profit booking from current levels would be dealt with with 200 DMA support, but there is an unlimited possibility on the upside.

MACD has been trading in the positive axis, while RSI is re-diverting from neutral to overbought zones. Thus, looking at the technical indicators and our Enjin Coin price prediction, there is a strong possibility for the bullish sentiment to continue. 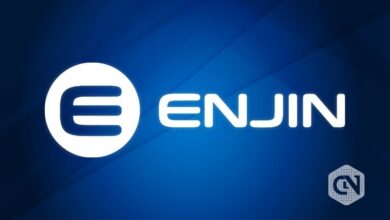