Enjin is the main blockchain, while Enjin coin is the digital store of different values meant to back the assets on its blockchain- primarily NFT or Non-Fungible Tokens. ENJ, the native coin of Enjin, is based on the ERC – 20 token and would enable software developers to develop, trade easily, and monetize their products. On the other hand, Enjin allows game developers to tokenize in-game products that can further be traded with anything of real-world value or digital assets. ENJ tracked its origin story back in 2009. The inception of its idea was made possible only in 2018 after the launch of a fundraising ICO in September 2017.

As the Enjin gaming ecosystem grows, more and more ENJ tokens will be locked into the in-game assets, thus decreasing the total number of circulating ENJ tokens. Currently, ENJ is capped at a total of 1 billion tokens. ENJ coin has a total market capitalization of USD 1.83 billion and a value of $2.18, ranking it among the top 100 cryptocurrencies with the 70th position.

Enjin has finally shown some strength at overcoming the previous rejection level of $2.30. Since the September profit booking, Enjin was badly losing over 45% of its value in close to two weeks. Retesting the bottom support around $1 has helped create a buying sentiment.

Enjin has indicated a strong potential of moving upwards after taking support from its strong buying level of $1.10. Further to that level, Enjin has prompted a stiff buying action, even retesting the immediate support level that existed before the September 2021 fall. As a result, $1.68 falls as the 200 days moving average, a strong support level that should halt any profit booking scenario.

Enjin will be attempting to retest the $2.30 level with a strong focus on becoming trending again. As per our Enjin coin price prediction, we can say that before breaching this important level, there will be a lot of ups and downs, which the investors will have to sustain to enjoy the potentially higher returns that Enjin can offer. RSI on this cryptocurrency has hit an overbought level indicating intense and sudden buying sentiment emerging at the current price point. Volumes can also be seen hitting a fresh high transaction level.

All these indicators point out the increase in buyers at Enjin. Therefore, 200 DMA or $1.75 should be considered a level of strong support with the potential to hinder further down-selling on the cryptocurrency. 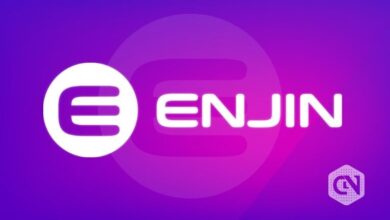