The development of the $3.3 billion cryptocurrency EOS has come down to absolutely sluggish rates. This is not the only one that faced a dragging growth, but the smart contract platforms where GitHub commits also plummeted in the few previous months.

Based on the data that has bee made available from the Longhash, growth activity and development of the prominent cryptocurrencies such as Ethereum, EOS, and Tron has shown a major slow-down. This has been observed in the past three months.

It is quite normal for the growth rate to drop in the holiday month of December. However, the months of November and January are more than enough for good developer time. Out of a total tally of 4000 commits in the past year, a meager 114 happened in the last three months on the EOS platform. 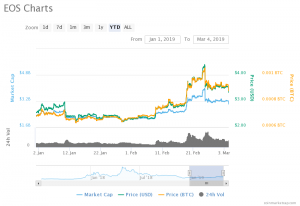 Tron and Ethereum also showed major drops, but they were not as severe as that of EOS. According to CryptoMiso, none of the blockchains were included in the most active group. In fact, there were some new names such as the Aelf in the group of top 10.

Insofar, according to the analysts, is the one that showed most activity. It also represented a few Ethereum-linked projects. Besides, companies like 0x and Raiden who scale solutions on behalf of Ethereum showed a higher level of development when compared to the long list of blockchain platforms. Aelf, the new entrant, carried on its impressive growth. A progress report released this month revealed optimistic news for the community.

Check the table from three months back, and you will find EOS sitting at a comfortable 9th position. The development activity has shown a steady drop in the past nine months.

2,700 commits were approved by more than 100 EOS contributors across these 9 months. And when you consider the past three months, this number drops to just 114 commits by a meager 100 contributors. All said, the number of developers toiling for the EOS has not decreased yet.

There have been news reports stating that EOS blocks are sized above the limit. In fact, the network is of such a large size that the operators do not want a “full history nodes” check to be run. This factor is pivotal to certain aspects of EOS development. When you consider EOS, it is completely different from the other players in the Crypto ecosystem. It has its own “arbitration court” which has the power to reverse a transaction that raises any doubt.

When you consider the developments outside the Github community, the count of commits on the punch cards would appear an important figure. The truth is, an individual commit can alter a file in the codebase.

Federal Reserve Bank To Analyze The ‘Collapse Of The Bitcoin Market’