EOS cryptocurrency is backed by blockchain technology and supported by EOS.IO protocol. The specialty of this protocol is it imitates major features and attributes of a real computer and its components like CPU and GPU. EOS cryptocurrency works on a smart contract platform and its decentralization what helps the users to have complete control on the transactions and anonymity. This platform aims to facilitate transactions on a minimum cost and less turnaround time. 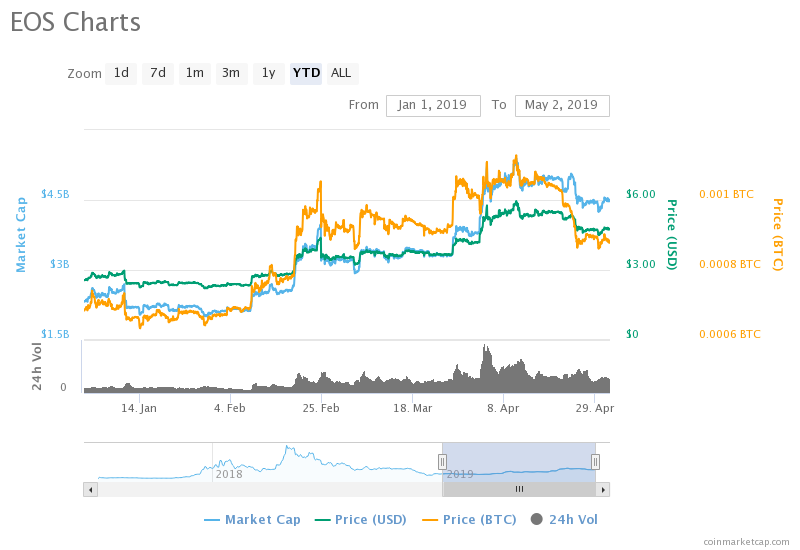 EOS coin was being traded around 2.5 USD at the onset of 2019. However, it managed to get a good growth over the last 4 months. The lowest point for EOS was on 29th January at 2.25 USD. There have been certain cases of steep ups and downs for EOS as well. On the last week of February, it managed to grow by 80% in just 3 days. But the major growth was achieved after 1st April boom. It managed to get and sustain 50% growth in just 4 days’ time. The current status of the coin is affected by price correction. The market cap on 2nd April was 4,178,390,871 USD, and the value of each coin was 4.61 USD. The market cap as well the value in USD has increased by almost 3.03% in these 30 days.

The 1-day growth graph is volatile to the core. Speculators will be harmed by this movement easily. In the last 24 hours, there were 6 major price variations. The range of the coin was 4.82 USD to 4.73 USD.

The value will be a little lower than the current one in a few weeks, as per our prediction. It will go to 3.8 USD in the coming two weeks. After this downfall, the coin will rise to 5 USD after facing one restriction at the same price. The 2019 prediction goes with 7 USD level.

The short term outlook is on the down trending. We advise the short term players to play safe. Long term holding will be the king of the market.

Top Cryptocurrencies That Deserve Your Attention