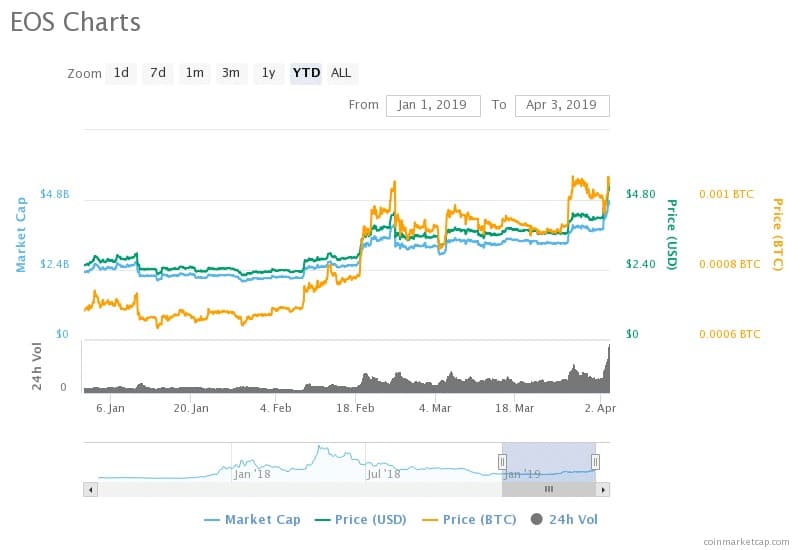 Based on the analysis from the Coinmarketcap, the market opened as low as USD 2300 million USD in January 2019.  The market underwent a downtrend period between January 10 and February 08, with the market cap value reaching its lowest of USD 2,132,898,367 on February 08 at 11:34 UTC with its corresponding trading price of 2.35 USD. After that, the market trend has been on the increase. It reached its peak prices crossing USD 3900 million USD on February 24 and March 28, with average linear values fluctuating between 3200 million and 3400 million USD for one month time period. The current trading value is the all-time high with an average growth of 20% in the overall market of the cryptocurrency which is under the influence of the bullish pressure.

EOS is a potential cryptocurrency with a market in support of the long term investment plans. Wallet Investor predicts that the volatility of the token will influence the market and there will be a surge in pricing with the value going low to 0.720 USD by the end of 2019. However, long term investment will reap benefits with the price reaching 911 USD by 2023. A technical analyst from steemit writers predicts that EOS per coin would be selling as high as 20 USD at the end of 2019 and also, expects overall growth of about 60% more than Ethereum’s market capitalization.

Eos which was earlier pressured down by the bear has risen from the ashes and have grown to maintain stability in rising values. Although the volatility affects the consistency, the current market is in support of the buyers. As per predictions, the future of the cryptocurrency is beneficial for the investors with long term investment plans.