Phantom Protocol is making giant strides to help the NFT community. The protocol recently wrapped its Bug Bounty and Testnet Reward. Now, it has joined hands with the ESports influencer 09. The partnership is established to explore the possibilities of NFTs helping the ESports community.

09 is a renowned DOTA ESports player with titles like G-League and WCG under his belt. The player has helped the sector grow throughout the world, but his influence is most prevalent in the Chinese gaming industry. His live broadcasts and social media handles cultivate a significant fan following, allowing him the ideal gaming celebrity for businesses.

Phantom Protocol is the next-gen NFT plus DeFi solution known for supporting fractional trading and NFT issuance. It is currently incubated with Conflux, while several renowned names have invested in the platform. Some of the most well-known investors are:

While the list seems prestigious, there are several more names included in Phantom Protocol’s portfolio. The platform recently concluded its Bug Bounty and Testnet Reward. The campaign went on for 11 days, where over 4,800 participants made their contributions.

Their first task comprised 4,806 users setting up Conflux wallets, which exceeded the expectations by 480%.

For the second task, 2,755 users chimed in to build NFT Asset and Crypto Asset. The task extended to depositing and withdrawing as well. It also surpassed the expectations by a whopping 275%.

The third task involved 2,669 users, and they were asked to add Stake LP in Phantom, liquidity on Moonswap, and earn $PHM rewards in the testnet.

Moreover, 563 users provided feedback to the platform, while 604 users submitted bugs. The campaign was a hit, and now its partnership with 09 will further expand Phantom’s prominence. But the development will not only benefit the next-gen platform as 09’s involvement will undoubtedly help the ESports community as well.

Phantom Protocol continues to make giant strides in the market. The protocol followed its Bug Bounty and Tesnet Rewards campaign with an unexpected partnership with the ESports sensation 09. The DOTA ESports player is known for his influence in the Chinese gaming community with multiple esteemed tournament wins. With the partnership, both 09 and Phantom Protocol intend to explore the potency of NFTs in the ESports community. If all goes well, both sectors will reap benefits from the partnership. 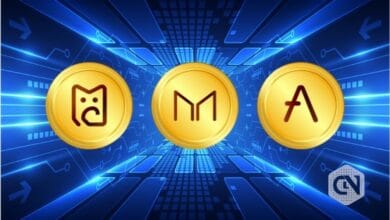 Mehracki, Aave, & Maker: The DAO Trio That Will Protect You From the Crypto Winter of 2022

3 NFT Coins That Will Make You a Hefty Profit in the Upcoming Months!