Ethereum (ETH) is an open source blockchain based smart contract platform enabling developers to build dApps (decentralized applications) & popularize it. Incepted in 2013 & made live in 2014 by Vitalik Buterin, Ethereum has inspired and given rise to a series of other blockchain-based applications now doing fairly well in this highly volatile market. The developers are rewarded with ETH (Ethereum token called Ether) for mining on the platform and making any transactions. ETH is different from its immediate competitor Bitcoin as it allows networks to expand with self-sustenance and growth in the process.  Solidity, the language used for developing smart contracts, can be easily learned through the tutorials made available by the team and is now widely used for building a whole new world of platforms with their own functionality and usage & Ethereum technology as their underlying principle. 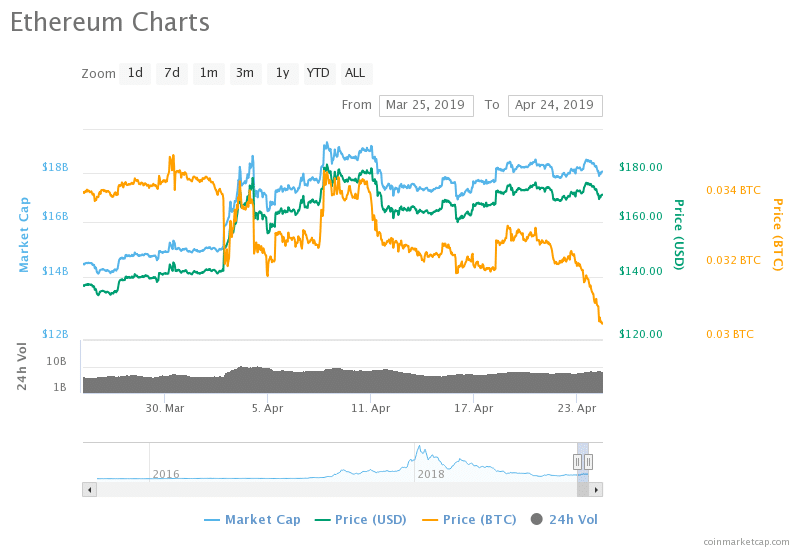 Ethereum is back in the game after a slowdown in the crypto world. The team is gearing up to host Asia’s biggest Ethereum hackathon in Bangalore, India in August 2019. The responses received thus far have been quite amazing, and it is a reflection of the growing popularity & acceptance of this crypto. To top it up, Societe General Group, French financial services company, has issued over $110 million worth bonds on Ethereum platform very recently. The price of the coin is expected to increase manifolds by the end of 2019 and can reach as higher as 200 USD. From a 2 year perspective, the price can shoot up to 300 USD. This, in fact, is the right time for a bulky investment.

6 days ago
Recent Post
Back to top button
Close
Close