Ethereum is an open source, public, blockchain based distributed computing platform that enables a large number of cryptocurrencies to exist without having to build their blockchain technology. It also enables developers to build smart contracts that can be executed automatically under certain conditions. Ethereum’s key functions include – running a smooth platform by compensating mining nodes and reward users under smart contracts platform. It provides a decentralized virtual machine, EVM, which execute scripts under the international network of public nodes. Ethereum is advanced to bitcoin in terms of transaction time, fees, technology, and mining process. 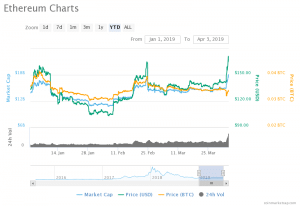 The current volatility of the cryptocurrency lessens the accuracy of the price predictions. Technological expert of Thomas crown art predicts that ETH will experience a global and monumental breakout with its price rising to 500 USD by the end of 2019. However, long term investment does not look profitable. Also, Trading beasts have made a very conservative price prediction, with the price of Ether reaching 908 USD by the end of 2019. According to current ETH Coin Price Prediction and analysts, the average price might revolve around 650 USD.

The current market under the bulls rule looks in favor of the buyers, especially the short term. The long term buyers have their profits depend upon the volatility of the cryptocurrency. The future predictions for ETH also do not suggest any long term investment. Nonetheless, the second half of 2019 looks promising. Hence, the investors could observe the trend and utilize the opportunity once the tables turn in favor.

Bitcoin Continues to Take the Lead, Even After the Rallying Coins

King of Cryptocurrencies: From Banks to Funds to Offices All are talking about Bitcoin