Ethereum is a decentralized programmable blockchain based software platform that administers if the applications are executed exactly as programmed without a chance of fraud, censorship or third part interference. The code on the Ethereum blockchain cannot be hacked or tampered. The network is run by the platform’s asset, the cryptocurrency called Ether – ETH. The inbuilt programming language Solidity is used in smart contracts and DApps which is later executed by the cryptocurrency Ether. Ethereum was created to overcome the shortcomings of Bitcoin, so it simply isn’t just a cryptocurrency but an effort to code, run and execute smart contracts and DApps independently without involving human interactions.

Ether is mined via block mining process through CPU and GPU mining, and 60 million Ether was created in the presale. Thereafter, approximately 80 million Ether was mined every year. Every 12-14 seconds, a new Ethereum block is mined, and 5 Ether is rewarded to the computer that mines it. The market cap value of Ethereum currently is $20 billion which is one third the MCap of Bitcoin and the price of one ETHER coin (ETH) is $231. The DAO was then created on the platform to act as a venture capital firm which is owned and operated by none. Immediately after its launch, it got hacked, and DAO tokens worth $60 million were drained out by hackers. This lead to the hard forking and Ethereum Classic was introduced. 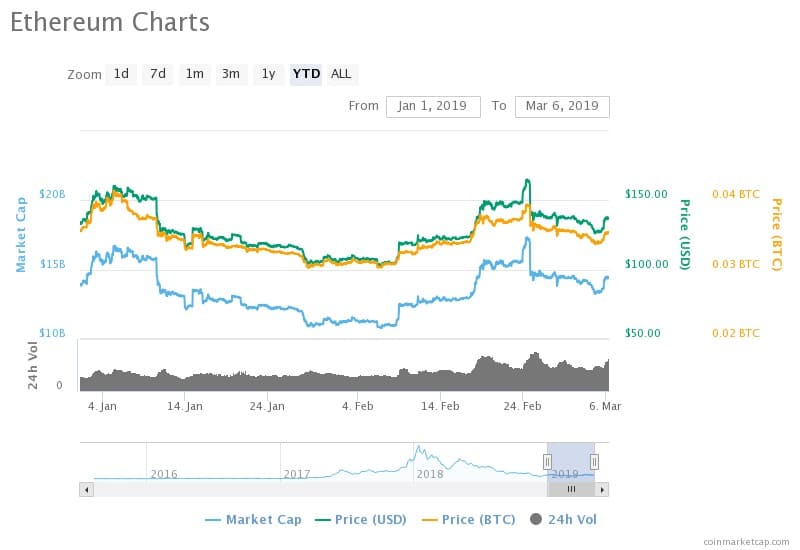 Elaborating on the prices of the USD and BTC, as per stats from Coinmarketcap, the current values are $137.25 and 0.03537799 respectively. The MCap values and the prices of BTC and USD have been on been on the same trend since the beginning of the year, with the MCAP/USD pair taking the lead, followed by the price of BTC. The price of USD had been as low as $104.13 on January 28 which is 31.81% lower than the current value. However, the price of USD reached a peak of $164.99 on 24 February along with its MCap value. This peak price brought the cryptocurrency to reach its milestone. The price rallied from $123.92 on February 17 to the peak price, with an increased percentage of 33.14% in 7 days. The variations in the Bitcoin’s price have been similar. The price had been as low as 0.03027199 on January 28, and it bounced to its highest on February 24 with the value of 0.03940520, the massive growth of 30.17%. However, the current value is lesser than its peak price by 9.20 percent.

The 20-day EMA exhibits an uptrend for the cryptocurrency. The values rose from $12,839,677,678 USD to $14,432,744,096 (current value) by 12.41%. The moving averages show that the balance falls in favor of the buyers. Hence Investors with long term investments would find it suitable to invest in this cryptocurrency. However, traders with short term investments will have to wait and observe the market tends. Once there is a stable increase in the currency’s values, investing will become favorable.

Dogecoin (DOGE) Price Analysis : Run Through on the slow progression of Dogecoin’s Market