EOS is a decentralized operating system based on blockchain technology, and it is an ERC20 token which could be stored on any wallet that corroborated with the ethereum platform. It supports the dApps on a commercial scale by providing the core functionalities, which helps businesses to set up blockchain applications similar to web-based applications. A private company developed the EPSIC network but later was released as an open source platform. Around a billion tokens were sold by block one on the ethereum platform to ensure that the native tokens were available at the launch of the blockchain. EOS, the 4th largest cryptocurrency managed to get $170 million in the first step after the startup. The major advantage with the EOS network is the increased speed in transactions per second and the elimination of transaction fees. This was accomplished by using delegated PoS consensus protocol and by being multi-threaded – being able to run on various computers cores. It also provided a better development platform for dApps. Ever since the EOS’s mainnet hit the market, the price has been on a healthy rise. 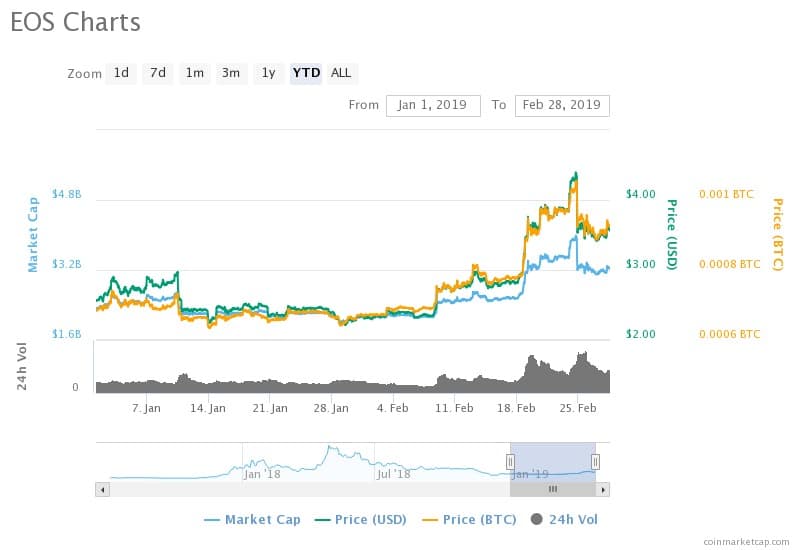 The 14-day Moving Average of this digital currency also exhibits an uptrend with Mcap value increasing from $2,501,599,622 on February 14 to the current value by 29.20%. The change in values within 24 hours has been on a 2.82% increase. With the percentage of both the moving averages on a remarkable difference with the present day value and the bullish pressure on the market, the cryptocurrency’s balance is in favor of the buyers with both long term and short term investments. Investors would see a good profit if this market trend continues in the future. Similarly, traders investing in this cryptocurrency will increase the value of both the currency and their investment.

Does Bitcoin Have a New Competition in The Form of Primecoin?