STEEM is a blockchain network that hosts Steemit’s social and blogging sites. STEEM’s network opened the space for the blockchain to reach social media platform. It is operated on Smart Media Token Protocol which is developed by Steemit, which is quite advantageous for the consumers. It uses Proof-of-Brain algorithm where the users can create and make changes to the content and earn tokens in the form of STEEM. The rewards to the users are based on both the quality and the quantity of the content. Apart from individual users, some huge corporates and organizations use the STEEM’s platform to advertise themselves and also earn from it. The major benefit with the STEEM cryptocurrency is its direct use in the non-digital world. It can also be exchanged with Fiat currencies. Due to the growth in the number of coins by 100% every year, there is no limit to the supply of them in the market. There are two other digital currencies in the network apart from STEEM – Steem Power and Steem Dollars. 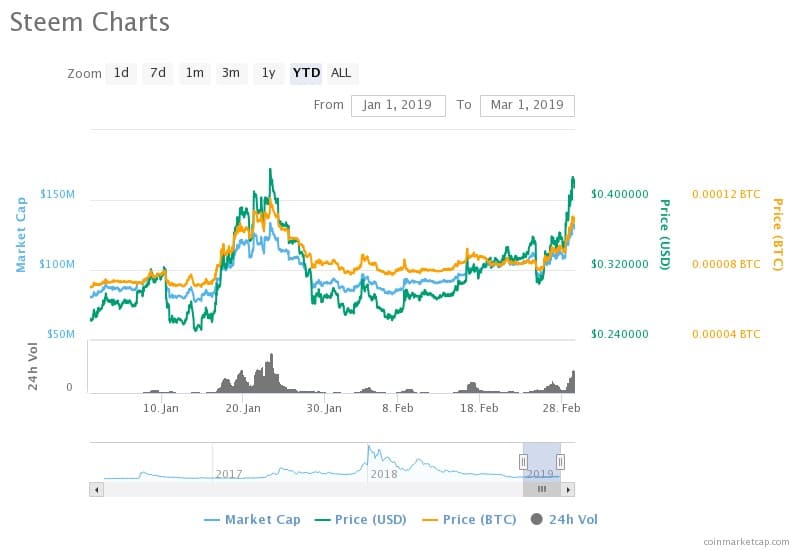 STEEM is ranked the 41st cryptocurrency in the crypto market by Coinmarkcap. The total supply of coins amounts to 329,628,093 STEEM, out of which the coins in circulation are 312,653,999 STEEM. Based on the stats, the market cap value of the cryptocurrency traded at USD 130,211,601 for a 24h volume of $13,008,719 on March 01 at 13:39 UTC. The value of STEEM started below 90 million dollars this year. Fortunately, the market value rallied to its highest on January 23. Although the market had a sharp fall from its highest to its lowest on February 01 by 36.89%, the numbers were ascending compensating for the loss in the past. There was a notable rise in the market value, which was relatively high by 54.41%, when the market cap value rose from USD 84,326,984 on February 01 to the current value. With the bullish pressure on the market, the cryptocurrency had a note-worthy growth.

The 20-day Exponential moving average (EMA) exhibits an uptrend with respect to MCap, USD and BTC values. The value rose by 43.10% between February 09 and March 01. Similarly, the 14-day moving average shows values ascending from 96,722,672 USD on February 15 to USD 130,211,601 (current value), with a growth rate of 34.62 percentage. According to the data from coinMarkcap, the percentage change in values within 24 hours has also been as high as 18.22%. With both the averages going outstandingly uphill, the bulls hold an upper hand with this cryptocurrency’s market. Bullish market means to invest time for the investors to get long term benefits. Traders can also earn a profit from their transactions due to the rising market. Investment from traders will increase the value of the cryptocurrency in the future, and the outcome will be highly beneficial.