ICOs, a kind of fundraiser in the cryptocurrency space have also become a medium to scam investors. To reduce the risk of such fraudulence, The Federal Bureau of Investigation (FBI) wants you to be tactful when it comes to your hard earned money.

At a recent interview with Netherlands-based financial news portal, the Paypers, the Bureau pointed out to some key features of the fraudulent ICOs. Here, Steven M. D’Antuono, section chief of the FBI’s financial crimes section revealed that the modus operandi of fake or illegal ICOs can be varied, but, there are some common threads in them. The fraud ICOs will misrepresent their experience in the industry, it will falsely claim the industry’s interest in the ICO, and most importantly it will guarantee the coin’s unrealistic rate of return. D’Antuono noted that in any investment product rates of return can never be guaranteed. He said,

“Like any investment product, rates of return can never be guaranteed and if it sounds too good to be true, it probably is.”

Using such tricks, the ICO scammers create a false impression to get the investors tricked out of their money. Moreover, D’Antuono suggests that people should avoid those ICO schemes which are wholly online, and does not have any physical address. He said that one should check the background and registration of the ICO offer on the Financial Industry Regulatory Authority’s (FINRA) BrokerCheck system. He strongly suggests,

“Potential investors in an ICO should perform due diligence on the principals of the entity as well as the individual offering the security, and the investor should confirm where the entity is physically located and which laws and regulations will, therefore, apply to that entity.” 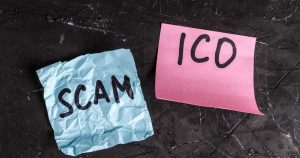 Additionally, the FBI also advises with an aim to protect investor’s money that one should only invest an amount which he can afford to lose. It emphasizes that the digital currency space is extremely volatile and an investor should be aware of the possible substantial risk.

The FBI declared in 2018 that it has received around 130 crypto-related cases at the time. It is notable that the FBI, the SEC and the Commodity Futures Trading Commission (CFTC) collectively works to have control over financial frauds including cryptocurrencies.

Dash is Making a Noticeable Spike with its Bullish Line