Neoland is a play-and-earn game mode in Neopolis, a game set in the virtual world where land parcels are controlled by players in Neoland, which are linked in Neopolis video games and real-world Land. The landowners can build new buildings, alter existing ones, and organize events. Neoland and Neopolis have different game systems, but they were designed to complement each other.

Each Land has its resources, and landowners need resources to enhance, upgrade, plan events for and personalize their NFTs. Buildings can improve the production of resources and also open new opportunities in the landscape. Also, landowners can schedule events in Neopolis and provide players with incentives and rewards.

By launching Neopolis and Neoland, Neoverse is creating a permanent world where gamers can play a casual game (Neopolis), manage their Lands, and create their online estates (Neoland).

An off-chain token, known as $NCOIN, is the basis of Neoland gameplay and serves as the game’s currency in the Neoverse. To purchase buildings, alter their Land, plan events, and many other things, the players should have NCOIN. Launching Neopolis and Neoland is creating a permanent world where people can play games for fun (Neopolis), manage their lands, and create their Digital Estates (Neoland).

Neopolis is an MMO free-to-play game accessible on both the iOS App Store and Android Google Play Store. Neopolis is officially launched in Europe; however, it can be played worldwide. Neopolis is an online game that blends elements of Monopoly and Pokemon Go. The players can buy, exchange, upgrade buildings, and trade in real life. The players can also travel virtually around the globe, build their property empire and fight it out in global leaderboards and cities worldwide. The best Neopolis players can win Land in Neoland and start building their properties as landowners. 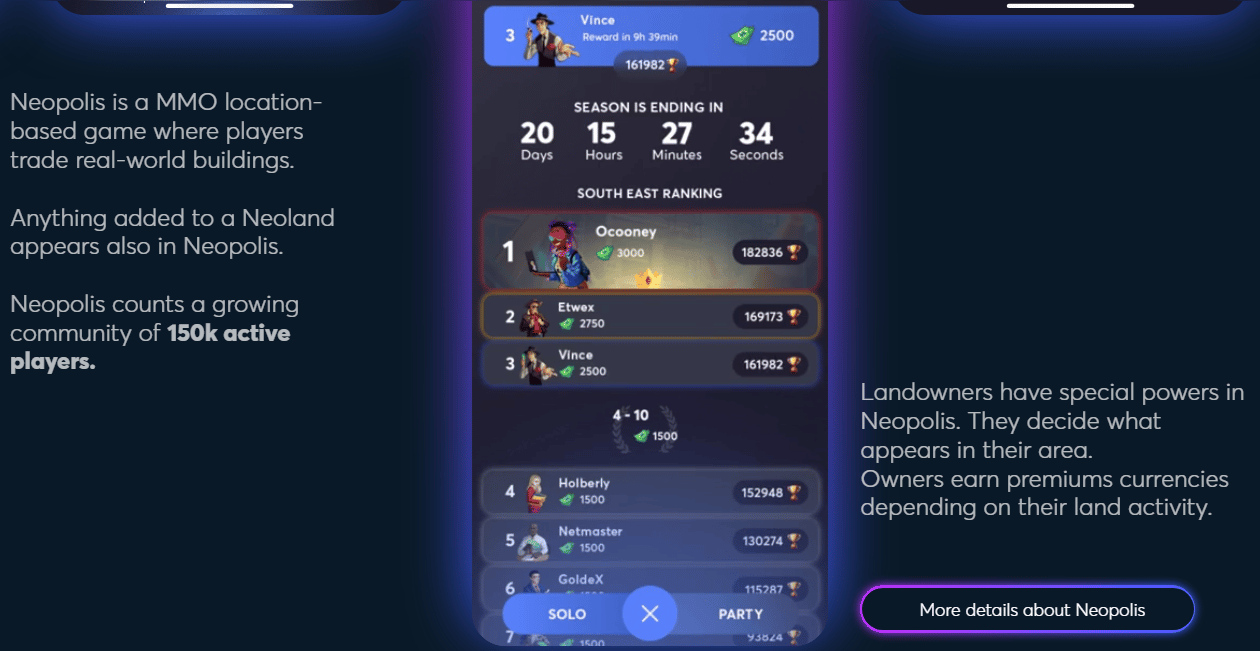 Neoland is a game mode of play-and-earn that takes place in Neopolis. In Neoland, players control and own parcels of Land linked to the Neopolis game and the actual Land. Landowners can build, customize structures, and host events on their Land. Neoland and Neopolis were created to complement each other, yet each comes with its own game system.

What is Neopolis, and How to Play?

Neopolis is a free-to-play mobile game mode with more than two million downloads. Neoland is the online Web3 game mode that gamers can access by winning or purchasing the Neoland NFT in Neopolis or on the second market. Since every action in Neopolis occurs on a Neoland Land parcel, every event that the Landowner hosts can enhance the gameplay experience available to Neopolis players. It could be in the form of additional sources, bonuses, and content exclusively for Neopolis players interacting with the Land.

The players can buy buildings through two methods – purchasing new buildings in their area or getting good deals from the Auction Room, in which Neopolis players can trade their facilities in real-time. The most ambitious players battle for the top positions on the global leaderboard by seeking out iconic landmarks. These are unique in-game structures that resemble real-world landmarks. It does not matter if it is Big Ben, Eiffel Tower, or the Colosseum; all gamers in Neopolis have the chance to own these famous buildings.

Neopolis players can upgrade and improve buildings by renovation cards, assigning employees, and other rewards to enhance their properties. Neopolis buildings earn in-game money every hour; players can boost their daily income by improving their building level with coins or other in-game item cards.

In Neopolis, it is possible to move physically using your phone’s built-in geolocation feature, just like in Pokemon Go or via the Neopolis transportation system. The travel system allows players to use different forms of transportation to get to new places. This will enable players to conquer buildings and connect with other players in new countries and cities without physically traveling to get there.

Neopolis players find or join a party and can compete with other parties in their town. Parties can control the in-game government seats in the game and participate in the decisions made during play through an election in the virtual form, where three parties will be voted into the city government by other players for the following season. After being elected, the party can alter game setups, like building earning rates, or even influence the gameplay within the city.

Neopolis is the gateway to Neoland. The main aim is to bring millions of new players to Web3 by constructing the bridge between Neopolis and Neoland and the path for free-to-play to play-to-earn. Each step in Neopolis is performed on the Neoland Land parcel, and every event organized by a Landowner will enhance the gameplay experience for Neopolis players. This could take the form of more materials, bonuses, or exclusive content only available to Neopolis players who interact with the Land.

Neopolis and Neoland are two game modes played within the same game map. Neoland Landowners organize Events and create Buildings visible on the game map. These aspects draw Neopolis players to certain Lands which offer benefits and resources in Neopolis. In completing each step, Neopolis gameplay can boost Landowner’s Lands’ revenue and success. This is a win-win scenario for the players from both modes.

Neoland can also be used as an Advanced Mode for Neopolis players. If Neopolis players make enough progress through the game, they are awarded the Land NFT for free. From this stage onward:-

The main game mechanics in Neoland are listed below:-

The popularity of the Land is determined by its place in the global rankings. Rewards of $NCOIN are given out weekly to landowners based on their Land rank. The basis of the ranking system is built on the game’s activity that players generate in Neopolis. The term “Land” in “Neoland” refers to the area of Land. It represents 737,000 square meters in real life, approximately 3/4 of a square mile.

The objective of every Landowner is to draw Neopolis users to their Land by creating a unique experience. The more Neopolis users visit the Land and the higher the activity level they have, the higher points and Land they can earn. The more points earned will increase the Land’s position in the ranking.

Landowners can access an event calendar that they can organize within their Land. Events are rewarded in exchange for Neopolis gamers who come to the Land and take part in the events. Therefore, events are an easy but effective method of increasing the popularity of the Land. Events may also increase Land revenue from Neopolis players who view adverts or make purchases on the Land’s property. To organize an event, the Landowner has to pay a few $NCOIN. But, certain events will be at no cost in limited quantities when the Landowner buys specific buildings through this bonus.

Within its two-year period of development, players enjoy spending time managing and maintaining their properties. The gameplay in Neoland is inspired by the city-building game design. In Neoland, Landowners can create their properties by activating, advancing, and personalizing virtual constructions. Each building has unique advantages for the Landowner and Neopolis visitors who play on their Land.

At the highest stage, the city simulation and city builder are made up of:-

Quests bring life to Neoland gameplay by rewarding active users by presenting various challenges. Quests keep Landowners interested for long periods while continuously managing and improving their Land. Some of the benefits Landowners receive through Quests include:-

There is always something new for landowners every day. Daily active players will earn rewards based on their performance. The rewards are used to enhance their Lands and NeoProps.

Seasonal quests have brought unexpected gameplay and objectives to Neoland Landowner. Seasonal quests offer the chance for the team at Neoland to create new gameplay and rewards for active players over a long time. These quests reward specific performance metrics for Landowners over and above the normal Land popularity leaderboard.

$NCOIN is an offchain token that powers Neoland gameplay. It is the game’s currency in the Neoverse. Players must have $NCOIN to buy buildings, modify their Lands, create events, and much more. There is no limit on the supply of $NCOIN as its primary goal is to support the expansion of the game’s economy. Keeping $NCOIN off the chain shields it from the volatility of markets.

$NLAND token is the core of Neoland, the community’s governance. It is limited to 100,000,000 tokens. It serves several purposes:-

Here is the Neoland Road explaining its various activities:-

In conclusion, Neoland is a “play and earn” game mode to create a universe that blends real estate, gaming, and blockchain technologies. Neoland is a mobile game that lets millions of players purchase digital versions of real estate properties. Neoland is a game that the Revolt Games team also wishes to increase the social element by creating guilds and DAOs (decentralized autonomous organizations) to increase benefits for the players. If you are looking to play the virtual version of Monopoly in real-world settings, Neoland is the one you need to look at.