There are so many coins on the market, then why we are talking singularly about Lisk (LSK)? Well, the reason is simple- its enormous potential. The bear market tendency since last year affected both the top listed coins as well as those who were making into the limelight. Although 2018 gave a hard time to the crypto coins, it also became a solid filter that screened good quality offering coins from the rest. One such rising star was- Lisk (LSK.) 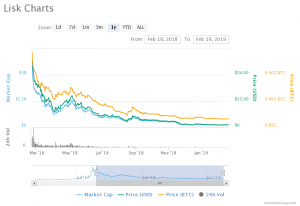 If we look at the charts that position the top crypto coins based on the largest market cap, LSK currently is at the 37th position. The current value of the crypto coin is 1.24 U.S. Dollar. Its all-time high was slightly above 38 U.S. Dollars. Despite the current status, the market analysts and several investors suggest that it is worth watching over Lisk in this New Year. Market analysts expect a new rally this year that should bring about some exciting growing time for the crypto coins and might as well propel them to greater success and performance. Here is the background of the crypto coin that supports this faith-

Instead of focusing on the popularity in the payment sector, LSK rather is interested in a very different ball game. The crypto coin was designed with the aim to be a platform that enables and propel more creations. The concept can be drawn parallel to that of other popular coins such as Cardano and Ethereum.  LSK is packed with a lot of potentials. It is a matter of patience to see how and when the crypto coin will start to offer an atmosphere where new creations can be reaped.

The proven potential of LSK-

Back in 2014 when the crypto coin was initially launched, it was released with the name- ‘Crypti.’ It was an open open-source platform. The developer of the crypto coin/ platform on purpose enabled the platform to permit dApp creation. It was made so to invite more and more developers to join the project to participate and contribute to the project.

In the next two years after its launch, LSK held an Initial Coin Offering. It was very successful. During that year coins worth of 100 Million U.S. Dollars were sold, which is almost equivalent to the seventy-eight percent of LSK’s ongoing total supply. During the Initial Coin Offering, 5.8 million U.S. dollars were raised. This huge interest and trust in the crypto coin show an obvious promise of the crypto coin.

Along with the internal breakthroughs and progress, the company was seen quite active in joining forces with other companies. Lisk ventured into some significant partnerships in the past few years. The partnerships further enable several newer possibilities to add more and features to the cryptocurrencies, as it opens up the portfolio of scope the project has in front of the developers, investors, and other partners. Lisk joined forces with big shots such as Microsoft Azure, lightcurve, ShapeShift among others.

On 14th Feb, in a press release ‘Lightcurve’ the company which is behind Lisk announced an improved and sped up development of Lisk. Lightcurve promised it based on the shift from manual testing to an automated testing system. As per the reports from the ‘blockchainreporter.com,’ Lightcurve will make use of three types of automated tests. They are as follows-

On the other hand, Lisk was listed in the top ten ICOs with the biggest ROI, as per the reports. Lisk was reported to have 26,367 percent.

Price Analysis of Gemini Dollar- a Dip in Market Trend