Holo is an upgraded version of blockchain technology which is aimed at developing the decentralized application. It is one of the most energy-efficient blockchain platforms and provides the feature of peer-to-peer transaction in a true sense. In blockchain technologies, the scalability of chain and the addition of new nodes is always a hectic process. However, this problem has been effectively taken care off in Holo. Holochain acts as a bridge between the community of distributed applications and the current centralized network. HOT is the digital token used for the transaction in Holochain. 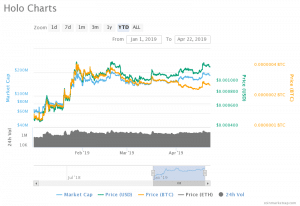 Since Holo (HOT) tokens are available on most of the top crypto exchanges including Binance and many others, high trading activity is obvious around it. Holo enjoys active community support along with the programming in popular languages like Javascript and Lisp for the development of decentralized apps (dapps), making it one of the most searched coins on Google. HOT is highly resistant to market shocks. It attracted fairly large trading volumes in the month of January this year. According to Digitalcoinprice.com and hot predictions, Holo (HOT) will hover around the same level as the current state. Furthermore, Holo seems to be on the bullish side of the algorithm and may trade at $0.002 around the end of 2019 and may hit $0.0025-mark in early 2020.

Bitcoin (BTC), the Only Factor for Variations in its Peer Coins Network; Yes-No-Maybe ?