Holochain is a distributed computer network that performs faster than the blockchain technology, which has infinite scaling capacity through its peer-to-peer networking and is based on cloud computing. The performance of the network does not reduce on the addition of distributed applications. With a decentralized network like Ethereum’s, every node has to process the entire chain, which is present in its entirety on each node. Distribution removes the need for this redundant information, and data integrity is maintained among unlimited peers without a consensus mechanism needed. With Holochain, instead of mining, node computers will lend processing power to hosted dApps.

HOLO (HOT) is the digital token for the Holochain platform, which allows the storage and distribution of data. It is a multipurpose decentralized platform with a primary objective to create a hosting space for social applications. This platform lets the consumers host various distributed applications on their system, without any external hardware requirements. It lets the users choose the revenue in the form of hosting prices; with various options in choosing the revenue. It also uses the PoS (Proof-of-Service) protocol to generate invoices for the services that are offered. 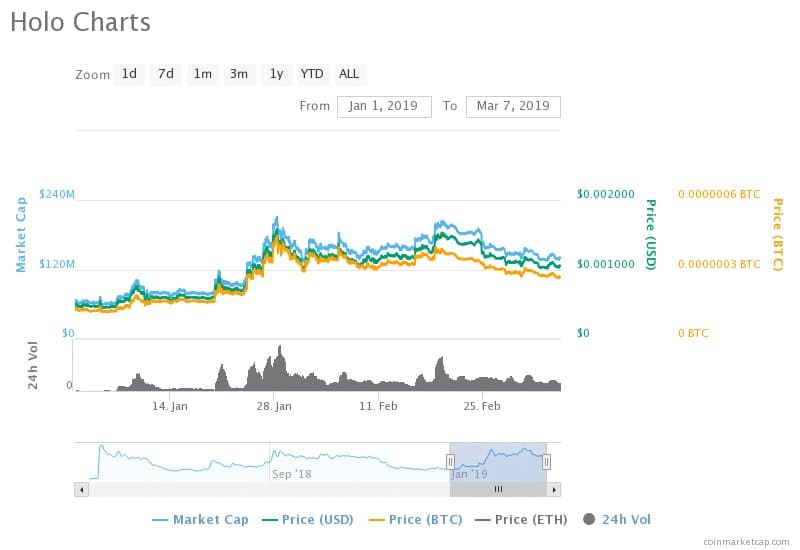 According to stats from Coinmarketcap, the corresponding market cap value of HOLO, the 39th largest cryptocurrency, on March 07 at 11:34 UTC is USD 140,170,852 for its 24h volume of $7,361,887 which is relatively lower than its value of USD 153,808,222 on February 07 by 8.87%. The cryptocurrency’s market value started as low as 60 million dollars at the beginning of January; the MCap value saw its all-time high of USD 208,007,094 on January 28. The values have been on a wave with many significant highs and lows after the peak value. However, the overall market cap value did not fall below 120 million USD after the values started increasing on January 23. The lowest and the highest value of the cryptocurrency have been USD 135,342,077 and USD 203,676,563 ON February 01 and February 19 respectively. The 20-day exponential moving average shows a significant dip in values. The numbers plunged from $174,479,920 USD on February 15 to $140,170,852 USD – the present day value by 19.66 percent. The descending values push the digital currency’s market under heavy bearish pressure.

CoinMarketCap has also been observing the prices of USD and BTC along with the MCap values. The present prices of USD and BTC on March 07, 2019 at 11:34 UTC are $0.001052 and 0.00000027 respectively. Stats show that although the curves on the market trend wave have been similar for the pricing moments and trading value, MCap has taken the lead, followed by the prices of USD and BTC. There were price swings in the price of BTC when it started low in January and reached the peak before going downtrend again. However, the price of BTC was at its lowest on February 01 with value 0.00000029 and has bounced up 34.48% to reach the all-time high price value of 0.00000039 on February 19. The market reached its pinnacle on February 19 at 12:34 UTC along with its MCap value as high as USD 203,676,563, the prices of USD and BTC were $0.001529 and 0.00000039, and the 24h volume was $31,433,369. The descending market is shown by the current value which is lower than the lowest price of USD. The cryptocurrency reached its milestone with the price of USD shooting from USD 0.001150 on February 14 to USD 0.001529 on February 19, a 32.96 percentage growth within 05 days. You can check out read more about Holochain forecast to get a full idea about the future prices of the coin.

The 14-day Moving Average of this digital currency also exhibits a downtrend with Mcap value decreasing from February 21 to the current value by 23.25%. With both the moving averages on a downtrend and the bearish pressure on the market, the cryptocurrency’s balance is in favor of the buyers. Investors with long term investments should invest in this cryptocurrency. Since the MCap value has been range bound, there will be an increase in the values in the future that will prove profitable for the investors. However, traders with plans of short term investments, should sideline themselves, observe the trend before taking a step towards investment.

Membership with Bitcoin Cash Gets a Green Flag from Chess.com, On BCH’s Proponent Request