Holo (HOT) is a digital token of the Holochain platform, which allows storage and distribution of data. It is a multipurpose decentralized platform with a primary objective to create a hosting space for social applications. These applications are hosted out of centralized internet through a peer-to-peer infrastructure and are based on cloud computing. This platform lets the consumers host various distributed applications on their system, without any external hardware requirements. It lets the users choose the revenue in the form of hosting prices; with multiple options in choosing the revenue. It also uses the PoS (Proof-of-Service) protocol to generate invoices for the services that are offered.

Holo is a new open source framework of Holochain, which contains a system of blockchains in which every node works on its separate blockchain. This function has removed the problem of scalability on blockchains, as every node has to update its blockchains. This is advantageous when one node goes offline, and no other node is affected. Hence, the data is well protected, and the primary blockchain continues without any impact. 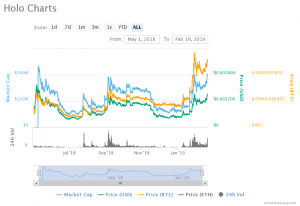 Statistics from Coinmarketcap shows that HOLO/USD pair had their stabilized “uptrend” values after December 28. The 20-day day Exponential moving average (EMA) exhibits an uptrend with respect to MCap, USD and BTC values. The corresponding prices per USD and per BTC were 0.001175 and 0.00000032 respectively, on February 13. However, the 24h volume for the 20-day EMA shows a declination. The difference in values is massive that it shows a 58.99 percent decrease since January 24.

Pricing moments and Market Cap value analysis show that USD and BTC have been overlapping ever since the value of USD fell sharply on December 15. MCap value has also been fusing along with the USD and BTS wave. After the fall in December, the values have always been bouncing up high. It reached its all-time high on January 28 with Mcap value – 203,723,558 USD, Price of USD – 0.001529 and Price of BTC – 0.00000043. The values temporary fell on February 01; nonetheless, it has been on a slow progression after that. This cryptocurrency reached a milestone in this period. The ETC/USD pair’s value leaped between December 28 and January 28 last year. From a low of 0.000424 USD, the values bounced to a high of 0.001529 USD in a month.

This analysis must have boosted the traders and investors to invest more in this cryptocurrency, hence increasing its value further, which works more advantageous for Holochain. Click here to get more information about HOLO Prediction from crypto experts.

QTum’s Market and its Slow Progress

What is The Monacoin Project and MONA Cryptocurrency