Hong Kong’s leading cryptocurrency exchange Bit-Z has announced the listing of Ripple’s XRP on its platform for trade and exchange. XRP will be currently paired to USD, and also with Bitcoin and other cryptocurrencies.

According to the company website, the exchange currently lists 140 cryptocurrencies and has 205 trading pairs. Vertcoin (VTC) trading was also recently introduced with an increase of over 451% within 10 minutes, claims the exchange. 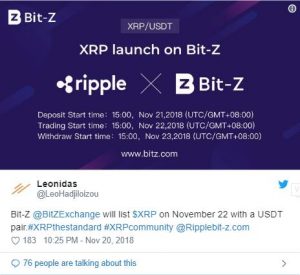 Bit-Z works in much the similar way as other crypto exchanges, where users need to open a single trading account through which they can buy or sell Bitcoin. Users need to verify their account through their mobile phone by incorporating some valid ID. Initially, almost all exchanges allow users to buy only Bitcoin.

While a large number of digital assets are available at Bit-Z, till recently, investors weren’t able to use it to buy anything directly. They needed to transfer Bitcoins from their wallet to their account on the exchange. This would enable them to trade Bitcoins for any of the other coins available.

Prior to adding Ripple’s XRP, Bit-Z allowed OTC Trade on its platform. OTC Trade enabled investors to use USD or Chinese yuan to buy ETH, BTC or LTC. These purchases were made off the exchange’s platform, but once investors had them, the purchases could be transferred to their Bit-Z account. The transactions could then be performed using a wide range of payment methods like wire, cash deposit, AlyOPay, Moneygram, Neteller, WeChat, PayPal, and Western Union. The OTC Market was launched in May 2017 which saw users’ activity rise by 69%.

This endeavor by Bit-Z might prove to be a turning point for the exchange as XRP has been seen gathering tremendous acceptance and popularity in recent times. The coin is fast evolving as one of the world’s most important cryptocurrencies. Also, the number of exchanges currently allowing users to buy XRP directly (instead of exchanging it for Bitcoin) is minimal. So, it is the perfect time for Bit-Z to gain grounds regarding XRP. 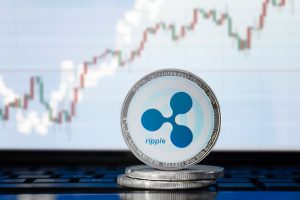 The recent crypto market crash saw the top cryptocurrencies in the red with double-digit losses. Despite the dramatic decline, XRP trading witnessed a positive trend as compared to the other cryptocurrencies.

A comparison of the current figures with those of November 17 last year shows that XRP’s price grew by +113%. On the other hand, Bitcoin and Ethereum saw a dip of -29% and -46% respectively. In October, XRP experienced a rise by over 10% while Bitcoin dropped by 14% and Ethereum by 16%. The gain meant XRP was up by five billion in market cap from Ethereum. According to CoinMarketCap data, XRP thereby overtook Ethereum as the second largest crypto coin in terms of market capitalization. Moreover, XRP was earlier, identified as the most profitable asset of 2017.

Established in 2016, Bit-Z is one of the most popular digital assets trading exchanges in Hong Kong. The exchange has branches in 10 countries. At present, 70% of the Bit-Z traders are from Japan, Singapore, South Korea, France, Australia, and the United States. Bit-Z strives to provide the most professional, secure, fast and efficient services.