KIN is the digital coin which was previously running beside Stellar and Ethereum before moving to its independent blockchain platform, Stellar Lumens’ separate version.

The Kin blockchain works on a federated or integrated blockchain which has validators within the federation itself.  As it is an authorized agreement, it neither allows a random person connected to the internet to take part in the consensus nor does it provides complete control to a single company. There are registered sets of validator nodes. The blockchain has both the current and potential members in the form of apps that are creating Kin-enabled experience or contemplating the addition of Kin in the future. Also, other trusted associates, such as exchanges and wallet service, will soon be capable of operating the nodes too on the blockchain of Kin.

The Progress of Kin 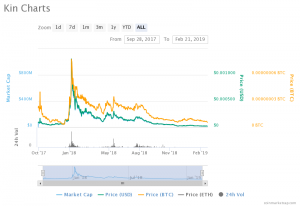 Kin introduced a dedicated platform for feedback exchange called Kin experiences inside of Swelly in last year’s 4th quarter. The Swelly application offered both its Android and iOS users the chance of earning and spending Kin as they begin sharing their valued opinions. Soon after, an official announcement followed about a tie-up with a couple of fresh partners called Tapatalk and MadLipz. Both these partners seemed promising of bringing millions of additional subscribers to the Kin ecosystem.

On the other hand, Kin was also actively working with an organization named DoSomething.org surrounding the United States elections for developing a fun-filled poll event inside Kinit. Once the users completed the poll for earning Kin, they were redirected for voter registrations if they had not done so already.

Finally, Kin also added yet another feature – a peer-to-peer functionality called admin tipping, which allowed users to dispatch their Kin to the other subscribers of the application. With this function, users on any public group chat on the platform could easily reward the group admin for encouraging positive app interactions while maintaining active and safer groups. This feature was included post the release of Kik’s chat themes for all the Android users.

During its ICO, KIN had successfully raised 70 million dollars, but it went on to create a buzz when about 10% of its total tokens were sold off. Hence, a prominent number of the unsold tokens remained with the KIN Foundation as well as the investment funds including Polychain Capital, Pantera Capital, and Blockchain Capital.

Taking a broader view of all these points, the project does seem excellent on paper. However, it is still unclear how many active users the app has out of its ever-growing user base. Also, there were arguments about its circulation supply with the Kin Foundation and Kik holding 1.2 trillion each and 756 billion being in circulation, as per the data recorded on 22nd January.

Coinbene Partners with Komodo against the Hack Attacks

Comparison of JP Morgan's 'JPM Coin' with other Cryptocurrencies