Known as Japanese “Amazon,” a giant e-commerce Rakuten may include cryptocurrency payment option. The firm holds a mobile app for consumers to access their services. The firm intends to offer Bitcoin and cryptocurrency integration in the near future as part of the update of Rakuten Pay mobile app. The update is planned to go live in later next month.

The announcement of the app update by the firm says that the new structure will be supporting both fiat and cryptocurrencies. It notes that the app will offer “all payment solutions embedded into one platform.” Recently, it has shifted the corporate structure integrating “Everybody’s Bitcoin” as part of a subsidiary of Rakuten Payment. Everybody’s Bitcoin, which was formerly called Spotlight was acquired by the Rakuten in August 2018 for $2.4 million. This acquisition was a significant move towards crypto payments on the e-commerce site.

The update will also cover the company’s prepaid card service named Rakuten Edy. Rakuten Edy enables QR code scanning for payments. The possibilities of Rakuten accepting Bitcoin for payment has increased the curiosity of crypto enthusiasts for the results. Notably, Rakuten’s net income rose by 28.4% to a total of $1.3 billion in 2018. At the time, the company stated that it was “considering entry into the cryptocurrency exchange industry” as it believes “the role of cryptocurrency-based payments in e-commerce, offline retail and in P2P payments will grow in the future.” 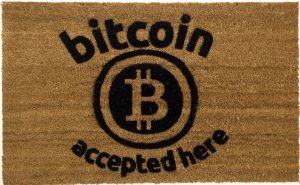 Meanwhile, Rakuten’s U.S. based counterpart Amazon has not shown any interest in crypto assets as yet. But, Binance CEO, Changpeng Zhao believes that Amazon, e-commerce focussed multinational technology company will be forced to release their own currency. As compared to Amazon, Rakuten has been more open to crypto assets integration.

Moreover, Rakuten’s American portal, Rakuten.com had already started accepting Bitcoin (BTC) as a payment option since March 2015. Apart from that, SBI Holdings a massive internet and finance firm in Japan also looks at crypto space with a bullish approach. Its own crypto exchange, Vctrade was introduced in July, which began accepting deposits in a number of big cryptocurrencies in December 2018.