As the name suggests, ICON is a blockchain based decentralized platform on iconizing the entire blockchain ecosystem by enabling a hyper-connected world with seamless transactions among various blockchain networks. The project is led by ICONLOOP, a Seoul based organization and aims to make possible easy adoption of blockchain by the masses. The team is working on what’s going to be the largest decentralized network called ICONSENSUS to spread awareness about blockchain and encourage acceptance. The platform aims to serve as a connecting bridge between the real & crypto world and its network currently comprises of many financial institutions, universities, banks and multinational organizations. ICON’s user-friendly wallet, ICONex is providing faster & secure transactions across multiple exchanges. 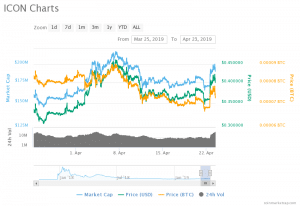 The strategic partnerships have always played an important role in increasing the popularity & demand of the coin. Recently, the team announced a partnership with Velic Financial to support the listing of ICON dApps. ICON (ICX) has also partnered with Samsung for its Chain ID feature which will be used by the electronic product giant for authentication into their mobile devices. The partnership had led to a surge of almost 15% in the price of the coin. This also is an indication of the rising interest in the technology and overall roadmap of ICON (ICX) among major investors and key market players. W Foundation has also signed an MoU with ICON team to reward & incentivize users making significant contributions towards the environment. The market sentiment looks positive, and the price of the coin can be expected to reach USD 0.9 by the end of 2019. If the vision of the company becomes a reality, the prices can reach as high as USD 2 by 2022.

TRON (TRX): If Bullish Trend Continues, It Might Break Through The $1 Mark

EOS (EOS) Predictions: Will EOS Cross The Resistance Level of $5 Once Again?