Icon like many other cryptos is a decentralized blockchain network that is purposefully developed for facilitating interoperability between the communities of independent chains. It is aimed to provide a framework for a web of chains that will comprise of organizations and enterprises belonging to bank, education and healthcare sectors. It uses an AI-based component for reward distribution and governance. This process is termed as Incentives Scoring System (IISS). 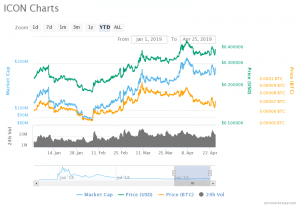 It was one of the most hyped projects back in 2018 with huge expectations pinned to the ‘Korean Ethereum.’ ICX possessed a consistent bearish grip in 2018 and the whole year was marked as devastating for this crypto. Initially, at the beginning of 2018, ICX was as worth as $12 per coin but, later it plunged deep in dismay, and it started trading around as low as $0.24/token. Its developers faced a turbulent situation due to their lack of efficiency skills, endeavor, and commitment. Although some partnerships were made last year, that was strong enough to retain the prestige of ICX.

Later, with a rebranding strategy, the company behind ICX changed its corporate name and corporate image of the loop associated with ICONLOOP. Its developers solidified its foundation with full expansion and innovation of ICON ecosystem. Currently, its developers came up with the news of its updates and developments for 2019, and it is expected to enhance the transparency in this project and fostering the growth of this crypto. The new roadmap is divided into 3 sections. These are governance, blockchain technology and services relied on ICON. The blockchain area comprises of various developments like loopchain, T-Bears, Icon service, Interchain-BTP, and Parallel Processing. ICON is aimed to use Score infrastructure for its governance. There are various other features included in their roadmaps, and these are highly impressive.

Now, the question is, how far it can go with these? We expect, if its developers are true to their words, this year can be a turnaround for ICX, and it can revive once again. Again, we must not forget the intense volatility that it’s still prevailing. So, with all these, we think, if everything meets the expectations, then ICX can be trading around $4.99-$5.00 by the end of this year.

We cannot assure of the fact if it is really worth in investing on Icon, but, we suggest, to wait and watch its updates and launch of the same and, then, take decisions accordingly as per its performances.